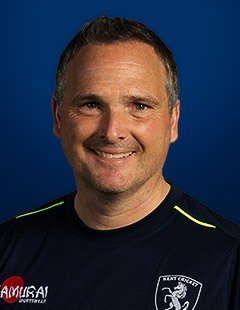 All-rounder Mark Ealham, followed in the footsteps of his father Alanbefore joining the coaching staff after his retirement.

Ealham was born in Willesborough, Kent, and began his career with Kent where his father, Alan had spent his entire career. He made his first-class and list A cricket debuts for Kent in 1989.

Ealham was first called into the England team for the start of India’s tour of England in 1996. His one-day debut came on 23 May in the first one-day international.

Although no result was possible due to rain, Ealham impressed as he reached 40 runs before being bowled by Anil Kumble. He made his Test debut in the third Test in 1996.

Ealham once again impressed, he scored 51 runs in the first innings and took second-innings bowling figures of 4/21, which he never surpassed at Test level; the game ended in a draw.

Despite his promising Test debut, Ealham was always regarded as a limited-overs specialist. This belief is mainly due to his free-swinging batting style; during a Twenty20 Cup match in 2005 against Durham he scored 45 off 17 balls including 34 runs in a single over.

However, his greatest performance as a player came on 30 January 2000 when England played Zimbabwe in the fifth match of a triangular tournament held in South Africa.

Ealham left Kent before the 2003 season and signed a three-year contract with Nottinghamshire, with whom he won the 2005 County Championship. Ealham took 56 wickets in 15 Championship matches that season, the most by a Nottinghamshire bowler, and the fifth-most in Division One – at an average of 20.80, the fourth-lowest in Division One among bowlers with more than 20 wickets.

He retired in September 2009, after 20 seasons in domestic cricket to take charge of cricket at King’s School, Canterbury which he combines with a part-time coaching role at Kent.

Nottinghamshire, England and England A.