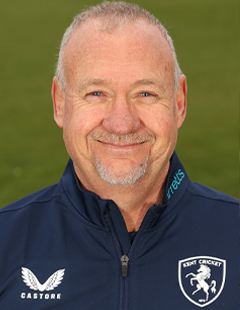 Mark played First Class cricket in his native Zimbabwe for Matabeleland. A First Class high score of 162* came for Zimbabwe A against Transvaal on a tour of South Africa. Mark had played just three First Class games, one each for Young Zimbabwe, Zimbabwe B, and Zimbabweans before he was called up to Zimbabwe’s Test team for their home series against Pakistan in 1993. He scored 5 and 0, and was dismissed by Waqar Younis in both innings on debut. Mark’s second Test went far better, as he scored 68 in both innings, but he couldn’t prevent Zimbabwe narrowly losing by 52-runs. Mark went onto play in 14 Tests and 23 ODIs, before retiring in 1998.

Mark coached at Tonbridge School in Kent, alma mater of a number of Kent players, including current professionals Zak Crawley and Marcus O’Riordan. He then became a Community Cricket Officer for the club, and after impressing he was appointed Head Coach of Kent Women in December 2018. Kent Women won the Women’s County Championship in his first year in charge, and he subsequently took up a coaching position in the Kent Academy, working under Min Patel. Mark was due to lead the 2ndXI in 2020 and act as Assistant Coach to Lydia Greenway for the Oval Invincibles’ Women’s side, before the schedule was ravaged by the Coronavirus pandemic.