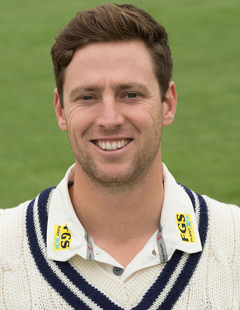 Matt Henry re-joined the Club in 2022 for up to seven County Championship matches and for the Royal London Cup, subject to regulatory approval, starting from 10 July.

The 29-year-old originally signed for Kent as an overseas player in 2018, and was set to re-join during the 2020 season, before having to mutually withdraw from his arrival due to the onset of the COVID-19 Pandemic.

The right-arm seamer took 75 wickets in just 11 matches in 2018’s County Championship for the county, finishing the year as Division Two’s highest wicket-taker, with a bowling average of just 15.48.

In the 2018 One-Day Cup, Henry was part of the side that reached the Final of the competition at Lord’s that season, taking 16 wickets in 11 matches.

He was awarded his Kent Men’s Cap (215) in May 2018 after an impressive start to his Kent career, and was honoured at the end of the 2018 season with Kent’s Bowler of the Year Award.

During his first stint as a Kent player, he achieved new first-class best bowling figures twice, firstly with 7-45 at Durham in April, before his current best of 7-42 versus Northamptonshire at The Spitfire Ground, St. Lawrence that September.

His current best figures came with his first five-plus wicket haul in Test cricket, as he recorded the joint-third-best figures by a New Zealand bowler with a career-best 7 for 23, in February 2022. His spell included three wickets in the same over, dismissing South Africa for their lowest ever total against New Zealand.