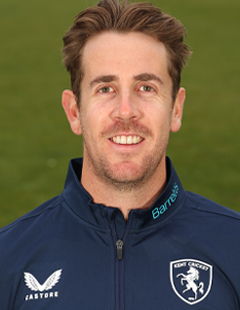 Matt Quinn joined Kent initially on loan from Essex for 2021, and then permanently on a three-year contract from the beginning of the 2022 season.

Born in New Zealand, he also featured for Auckland in domestic cricket, and had previously won English domestic T20 competition before becoming a Spitfire.

As the right-armer holds a British Passport, he is registered as a domestic player for Kent.

He starred for Kent during their demolition of Middlesex in the Vitality Blast at Lord’s, despite Kent to field an entirely new playing squad due to COVID isolation.