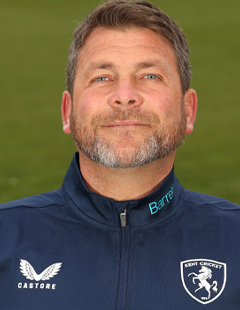 An ever present in the 2007 Twenty20 Cup winning side, Matt is a real Club favourite and popular among players, colleagues, Members and supporters.

He holds the record for the highest score by a Kent player at The Spitfire Ground, St Lawrence; 275* vs Somerset in 1996, sharing 100+ run partnerships with Trevor Ward, Carl Hooper, and Dean Headley.

Walker’s playing record speaks for itself: 9,722 in First Class cricket, 5,665-runs in List-A cricket. Matt played in 40 T20s for Kent, and his high score was 58*. In an interesting twist of fate, Tim Groenewald was the last bowler to dismiss Matt in T20 cricket; Tim would, 12-years later, join Kent with Matt as Head Coach.

After retirement, Matt replaced Graham Gooch as Essex’s batting coach, when Gooch joined the England set-up on a full-time basis.

Three years in the role followed, before in 2014 he returned to Canterbury to become Assistant Coach to Jimmy Adams. For two years Matt was Adams’ assistant, and when Adams left in 2016 to return to the Caribbean, ‘Walks’ was promoted to Kent Men’s Head Coach, which he cites as being his proudest cricketing moment.

In 2018, Matt led Kent to promotion from Division Two of the County Championship, and finished as runners-up in the Royal London One Day Cup; losing to Hampshire in the final at Lord’s.

In September 2020, Matt signed a contract extension lasting until at least the end of the 2022 season.

He became the first person to win England’s domestic T20 competition as both a player and a coach, both with Kent, as the Spitfires won the 2021 Vitality Blast on 18 September that year at Edgbaston.