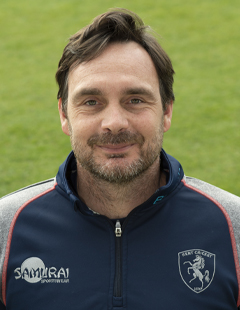 An all-rounder who bowled slow left armers, Yardy was born in Pembury, Kent, but played professional cricket for Sussex between 1999 and 2015. In total he played 193 First Class games, 209 List-A matches, and 126 T20s. A high score of 257 in First Class cricket came against Bangladesh in a tour match for Sussex. Mike’s bowling flourished in T20 cricket, and he was an important part of the England 2010 T20 World Cup winning side, as England beat Australia in the final by 7-wickets. Yardy has a top score of 60* in ODIs and 35* in T20Is. His best bowling figures were 3-24 in ODIs and 2-19 in T20Is.

After retirement, Yardy earned a degree in Sports Psychology at Chichester University, and was coaching cricket at Hustpierpoint College, while also being involved with the Sussex Under-17s. Mike became Sussex batting coach in 2017, and then Sussex 2ndXI coach in 2018. Involvement alongside Min Patel with the England Under-19s followed, but Yardy left Sussex midway through the 2019 season to become batting coach at New South Wales in Australia.

Yardy joined Kent during the Coronavirus outbreak of 2020, and left in November 20221 to take up the position of Academy Director at Sussex.

He was a part of the Kent coaching staff that oversaw the Spitfires’ 2021 Vitality Blast win at Edgbaston on 18 September.