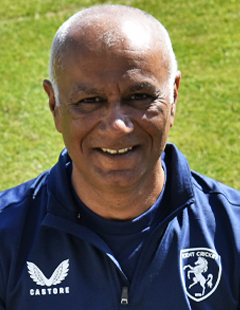 In a career spanning nearly 20-years with Kent Cricket, Min took 589 First Class wickets with his left arm spin. Born in India, his debut came in 1989 against Middlesex, and he went on to play nearly 300-times for Kent in all formats. Higher recognition came when he was called up to the England to play against the touring Indians in 1996. Min only played in two Tests, and his only Test wicket was that of Sanjay Manjrekar, caught by Graeme Hick. but continued with his tremendous work ethic and never say die attitude at Kent, for another 10-years.

In 2018 and 2019, Min coached the Kent 2ndXI, and in 2019 the 2ndXI won the 2ndXI 50-over Trophy, beating Durham in the final. Min now coaches in the Kent County Age Groups and Academy, and his official role is as Head of Talent Pathway. Some of the players Min has coached through adolescence include: Adam Ball, Alex Blake, Jordan Cox, Zak Crawley, Marcus O’Riordan, Adam Riley and Ollie Robinson

Min has also been involved with the England Under-19s, coaching them in the build up and at the 2019 Under-19 World Cup.

Kent Cricket is pleased to announce the appointment of current Second XI Coach Min Patel as the club’s new Head of Talent Pathway.

He was appointed as Second XI Coach in January 2017, after previously working with the county’s spin bowlers, and coached the Second XI to victory in this year’s Second XI Trophy, a competition that the club had not won since 2002.

Patel will now oversee the development of boys from 13 to 18 years old alongside the Head of County Age Group squads, Mark Dekker, through to the Kent Cricket Academy and then the transition into the Second and First XIs.

He will also work alongside Kent Cricket’s Women and Girls Officer, Helen Fagg, helping to produce female players for the Kent Academy and the county.

On his new role, Patel said: “I’m delighted to have the opportunity to work with the most talented young players here at Kent.

“We’ve also produced great female players such as Lydia Greenway, Tammy Beaumont and Tash Farrant, who have all represented Kent and England.

“My role is to ensure that Kent has the best and most progressive player development and scouting system we can possibly have.”​

Director of Cricket Paul Downton said: “We are fortunate to have someone of Min’s vast experience to lead our Talent Pathway.

“He is a former Kent and England cricketer that has spent the last 12 years successfully coaching a wide range of cricketers, culminating in his most recent roles as Kent’s Second XI coach and also spin coach to the England Young Lions.

“Working with Matt Walker, Mark Dekker and Helen Fagg, Min will play a pivotal role in ensuring the coaching and development of the best young cricketers in the county is aligned from top to bottom.”