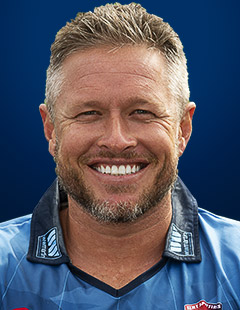 After seven seasons at the club, Mitchell Claydon left Kent at the end of the 2019 season.

Initially joining on loan in 2013, the right-arm seamer joined Kent permanently from Durham in 2014 and has made 183 appearances in total so far for the county.

The Australian-born bowler was awarded County Cap number 213 during Canterbury Cricket Week in 2016.

He was promoted twice with Kent from Specsavers County Championship Division Two, and was part of the Kent side that reached the Royal London One-Day Cup Final at Lord’s in 2018.

He will be remembered at the club for his huge personality and his contributions both on and off the field.

On leaving Kent, Claydon said: “I’d like to give a huge thank you to all my coaches and teammates over the past seven years here.

“Thank you to everyone for all the support over the years. I’ve made memories and friends for life here.

“Best of luck to ‘Walks’ and the rest of the Kent Cricket squad and staff for the future.”

Head Coach Matt Walker said: “Mitch has been an outstanding servant to Kent in his seven years here and has been one of the real characters in the dressing room.

“He’s also produced some great performances for us, whether that be in red ball cricket or at the death in limited overs formats.

“He’s been a real match winner for Kent on the field and a true champion off it. He’ll be hugely missed.”