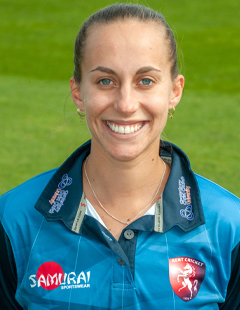 Farrant, a Kent Cricket Academy graduate, made her Kent Women’s debut in 2012 and was part of the Kent side that won the 2016 Women’s County Championship .

Farrant started off with the England under-19s and then in 2013, at the age of 17, received her first call up for the England women’s cricket team, for a series against Pakistan. She went on to become the youngest member of the England squad that won the 2013–14 Ashes in Australia.

In April 2014, she was one of 18 players awarded the first set of England and Wales Cricket Board central contracts for women players, at the time, the youngest recipient of a central contract. Between 2013 and 2018, Farrant made 15 appearances for England.

In 2016, Farrant signed for Southern Vipers and played for them in the Women’s Cricket Super League. For the 2020 season, Farrant was given a regional retainer contract for the South East Stars, captaining the team in the Rachael Heyhoe Flint Trophy. In December 2020, Farrant then became one of 41 women’s cricketers given a full-time domestic cricket contract and has since been signed for the Oval Invincibles in The Hundred Competition starting this year.

In January 2021, Farrant was recalled to the England team for their series against New Zealand. She played in the first match of the series and took two wickets in the match.