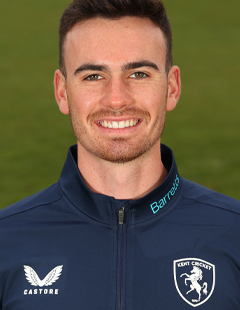 Nathan is a genuinely quick bowler and an extremely clean striker of a ball.

Although Nathan was born in Harare, his father is English, and he first came to this country when he was involved in a cricket exchange between St. Stithians in Johannesburg and King’s College Taunton, where he studied for a BTEC.

After making his Kent debut in 2020 after initially joining the county on loan with an agreement of a permanent deal beginning from 2021, Gilchrist made his debut in Kent’s victory over Surrey in 2020’s Bob Willis Trophy.

The right-arm quick broke into Kent’s first-class and List A sides during 2021, collecting his maiden five-wicket hauls in both forms of the game as a Kent player, including an impressive 5-38 against Derbyshire in the County Championship.

Overall in the Championship that year, he took 30 wickets at 20.66, featuring in nine of 14 matches.

At the 2021 Spitfire Kent Cricket Awards, he became the second recipient of the Club’s Men’s Emerging Player of the Year Award.