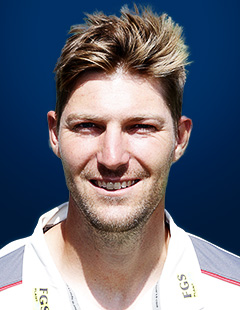 Ollie Rayner, a tall and self-effacing offspinner, has slowly gained himself a solid reputation as a key performer in Middlesex’s ranks. He played a central role in Middlesex’s 2016 title success, taking 51 wickets at 23.57 despite having to contend with benign Lord’s pitches for much of the summer.

Rayner, born in Germany, entered Middlesex folklore when he took the extraordinary figures of 15-118 in a Championship victory over Surrey at The Oval in September 2013. It was a worthy reward for a cricketer who had been easy to label a journeyman. He makes the best of his build with a high arm action, achieves good economy, but lacks genuine spin on the ball.

After graduating from the Sussex and ECB academies, Rayner signed a contract with Sussex in November 2005. Although primarily an offspinner, he became the first Sussex player since 1920 to score a century on debut when he scored 101 against the touring Sri Lankans in 2006. His main chance, though, came following the retirement of Mushtaq Ahmed in 2008 as he became the club’s frontline spinner. By the end of the season he had done enough to earn a call-up to the England Performance Squad. That was, though, a high-point. His form tailed off in 2009 and his 2010 season was curtailed by the arrival of Monty Panesar at Hove. He also had to remodel his action after being called for throwing.

Rayner joined Middlesex on loan in 2011, prospering enough to be rewarded with successive longer-term contracts. He performed admirably, but his exploits at The Oval did not prove a springboard to greater things, other than an England Lions call-up to Sri Lanka. His bowling form subsided in 2014, when his five Championship wickets cost 119.20 apiece, although he put in a dependable stint the following year in a holding role which he freely admitted was “not sexy”. The simple truth, he observed, was that all an England spinner could do with so many Championship fixtures in early and later season was to hang in there in the hope of a few matches in dryer weather.

Assistance came in 2016 with new toss regulations which persuaded counties to abandon their reliance on green seamers and, although Lord’s provided scant encouragement to spinners compared to some other grounds, Rayner prospered with his first 50-wicket haul in the Championship. Match figures of 9-112 against Durham brought Middlesex their first win at Lord’s in August and convinced them that the ground would not necessarily be a drain on their title ambitions.