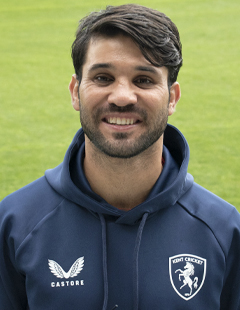 Qais Ahmad joined Kent Spitfires ahead of the 2021 Vitality Blast, making his debut against Gloucestershire at The Spitfire Ground, St Lawrence.

He made 12 appearances for Kent during their victorious 2021 campaign, taking ten wickets with an impressively low economy rate of 6.65, the fourth-best economy of any bowler in the competition to play ten or more matches.

Memorable performances from the Afghanistan international in 2021 included his spell of 2-13 from four overs in the Spitfires’ Quarter Final against Birmingham Bears, and 2-19 in the Final against Somerset.

He was Kent’s overseas star at 2021 Vitality Blast Finals Day at Edgbaston on 18 September, helping end the Club’s 14-year wait for silverware.