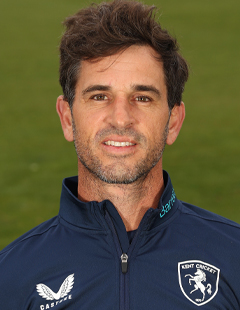 Ryan ten Doeschate, who retired from the professional game as a player after the 2021 season, joined up with Kent Cricket on 1 January 2022 as Men’s Batting Coach.

As a player, ten Doeschate featured in teams all across the globe in franchise cricket, winning titles in the Indian Premier League (IPL), New Zealand’s Super Smash, as well as captaining Essex in England – overseeing multiple successes across all forms of the game.

The former all-rounder made 57 appearances for the Netherlands in international cricket, most notably scoring two centuries in the 2011 ICC Cricket World Cup, finishing his international career with an ODI batting average of 67.00.