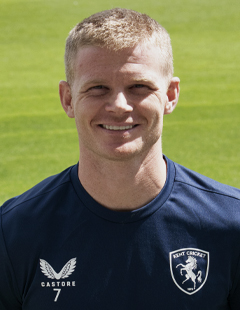 Kent Cricket Academy graduate Sam Billings became first-choice wicketkeeper in 2014 ahead of England Ashes winner and Kent hero, Geraint Jones. He ended the season as Player of the Year at the Spitfire Kent Cricket Awards, and earned a call-up to the England Performance Programme.

Sam rediscovered his batting form with a series of scintillating knocks in the Royal London One-Day Cup including 64 off 54 v Durham 135 off 58 balls at Somerset, 87 off 42 at Surrey, 51 not out off 39 balls v Sussex, 61 off 42 v Gloucestershire. He blossomed in the 50-over format and was instrumental in the club’s run to the semi-finals.

Billings made an early impression on Kent followers in 2012 with a glittering 143 against Derbyshire at The Spitfire Ground, St Lawrence – breaking the then record for highest one-day score by a Kent player at Canterbury.

In 2015, following an impressive tour with England Lions, he made his senior international debut with some cameos in the one-day international series win against New Zealand. He kept his place in the squad for the limited-overs series against Australia and on the winter tour to play Pakistan in the UAE.

A match winning half-century against Pakistan helped clinch the IT20 series before a series of good knocks for the Lions bolstered his reputation in the shorter formats either side of the New Year.

Billings was appointed Club Captain in January 2018, captaining Kent to promotion to Division One of the County Championship, and runners up in the Royal London One Day Cup.

He became the first male Kent-player to score an ODI century for England when he amassed 118 off 110-balls in the first ODI against Australia in 2020, ending that series with an average of 61.

In 2021, Billings led Kent to their first trophy in 14 years, captaining Kent Spitfires to Vitality Blast victory on 18 September, their second T20 title in Kent’s history.

The beginning of 2022 saw him make his long-awaited Test debut for England against Australia in a day/night Test at Hobart – making Billings the 700th Man to play a Test for England, the 60th man from Kent, and the seventh Kent Men’s wicketkeeper to do so.