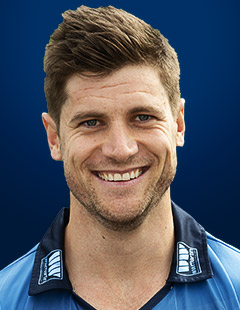 Sean Dickson signed for Kent in July 2015 after impressing as a triallist in the second XI.

The South African-born right-hander holds a UK passport thanks to his Beckenham-born mother.

He played first class cricket for Northerns in South Africa before making his county breakthough with Kent via a stint in the East Anglian Premier League.

Dickson won the Supporters Club’s best uncapped player award in 2016 after a breakthrough season where he scored 207 not out against Derbyshire in the Specsavers County Championship.

In 2017, he achieved the second highest score of all time by a Kent batsman, hitting 318 against Northamptonshire at The County Ground, Beckenham.

In that innings, he shared a club record stand of 382 with Joe Denly.

He is yet to secure a regular spot in the limited overs squads but has impressed in rare appearances with 99 on his Kent List A debut against Middlesex at Lord’s in 2016.