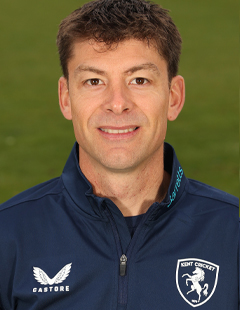 After his arrival at the St Lawrence Ground in 2005, Cook became one of the club’s most reliable performers with his nagging accuracy. The right-arm seam bowler joined Kent from Middlesex, where he honed his skills under the tutelage of Angus Fraser.

Noted as one of the most consistent bowlers on the county circuit, Simon’s return of over 340 first class wickets shows he is an invaluable commodity. However it is really in the shorter form of the game where he really excelled. He played a major role in the Spitfires’ 2007 Twenty20 Cup success when his tight middle-over bowling, and knack of taking crucial wickets at regular intervals, helped Rob Key’s men to glory.

With 229 List A and 81 t20 wickets to his name, Simon continued to prove his worth as a dangerous bowler in one-day cricket. He also has good ability with the bat, often providing valuable runs down the order; something which was evident when he made 51, in the LV= County Championship fixture against Middlesex, batting at eleven.

Coaching was always something Simon wanted to move into after playing, and he completed his ECB Level 4 coaching course while he was still playing. He coached France to a 5th placed finish at the 2013 European T20 Championship, and then became Hong Kong’s bowling coach. In 2015, Cook was appointed as Interim Head Coach of Hong Kong, before becoming the Head Coach on a full-time basis. Under Simon’s stewardship, Hong Kong won their first ever ODI and First Class matches in 2015, and competed in the first round of the 2016 ICC World Twenty20, failing to progress from a group containing Afghanistan, Zimbabwe, and Scotland. With Simon as Head Coach, Hong Kong claimed their first Full Member scalp when they beat Afghanistan by 30-runs in a rain affected World Cup Qualifier. To add to the list of achievements, Simon led Hong Kong to their first ever competition victory, as they won the 2018 Asia Cup Qualifier, finishing second in the group, but beating the UAE by 2-wickets in the final. In the 2018 Asia Cup itself, Hong Kong were drawn with Pakistan and India. They lost to Pakistan by 8-wickets, and India by 26-runs.

In 2019, Simon left Hong Kong, and returned to Kent where he was interviewed for a role at Essex, but chose to return to Kent as specialist Bowling Coach, to work with ex-teammate Walker. Simon’s influence at the Spitfire Ground has been felt by all. Described by Walker as the ‘Bill Gates of cricket’, Simon combines the latest computer technology with his cricketing experience to get the best out of Kent’s talented bowling attack.