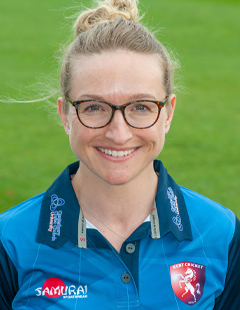 After a professional career totalling 11 years, Susie Rowe made the decision to retire from cricket in November 2021.

Originally having played for Kent from 2004–2012, Rowe re-joined Kent Women ahead of the 2020 season, and has made 79 appearances in total for the Horses.

Upon her return to the county, the right-hand batter also contributed towards tournament wins the Vitality Women’s County T20 South East Group and the Women’s London Championship in 2021.

Rowe scored 1,414 runs at an average of 33 across both formats for the Kent Women in her career. Her Kent high-score of 67 runs from 59 balls came in a T20 match against Yorkshire in August 2012.

In 2021, she received her county cap (number 36) from Kent in recognition of her achievements for the Horses.

Lewisham-born Rowe also made 23 appearances for England Women between 2011 & 2013 in limited overs cricket, as well as featuring for the South East Stars in women’s regional cricket and London Spirit in the first edition of The Hundred.

After originally stepping away from cricket in 2015 after two seasons playing for Surrey, Rowe featured in the England Hockey National League Premier Division for Canterbury Hockey Club, after playing International hockey for England at Under-21 level, and still plays in the National League for Sevenoaks Hockey Club.