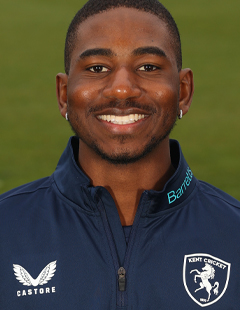 A Sports Scholar at Eastbourne College under the mentorship of former Kent stars Rob Ferley and James Tredwell, Muyeye was named as Wisden Schools Cricketer of the Year for 2020, an award previously won by England stars Jonny Bairstow and Jos Buttler, as well as Kent’s Vice-Captain, Daniel Bell-Drummond.

Born in Zimbabwe but qualifying as a domestic player, Muyeye is a highly-talented, attacking batsman, and a useful off-spinner with an outstanding schoolboy record.

He made his Kent debut against Sussex in 2021’s County Championship, and recorded a top score of 89 against Middlesex that season in Kent’s last match of the campaign that saw them top Division Three in that season’s format.