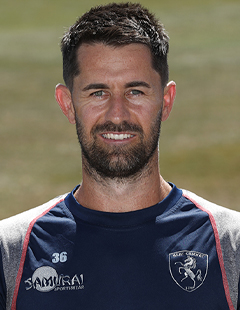 Tim joined Kent from West country rivals Somerset in 2020 after six seasons with the club. Before that, Tim spent time at Derbyshire and Warwickshire. Tim has over 400 First Class wickets and 2,000 runs.

A right arm seam bowler and power hitter down the order, Tim offered Paul Downton and Matt Walker the chance to add a wealth of experience to Kent’s young bowling attack. Alongside Darren Stevens, Tim compliments young bowlers such as Matt Milnes, Harry Podmore and Nathan Gilchrist and let them tap into the knowledge he has accrued over 15-years of playing County cricket.

Tim’s debut came in Kent’s mammoth innings and 25-run victory over Sussex in the Bob Willis Trophy in 2020. His first wicket in a Kent shirt was that of Sussex opener Tom Haines, caught in the slips by Jordan Cox for 21.