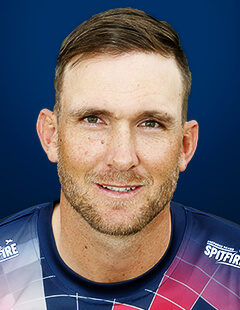 Built like a fast bowler – tall, broad-shouldered and strong – Hardus Viljoen became one of those that got away from a country with an embarrassment of resources in his department. In December 2016, Viljoen signed a three-year Kolpak deal with Derbyshire to put on hold a possible international career. At the time, Viljoen had played just one Test but had established himself as the leader of the Lions’ pack and was a regular in South African A sides.

His ability to bowl quickly and unleash a mean bouncer are Viljoen’s greatest assets and they were evident from the early days of his career. He started at Eastern, in Benoni, where he rose to prominence in the 2010-11 season. He finished second on the provincial three-day bowling charts. He was signed by the Lions and quickly found a home at the Wanderers, whose fast, bouncy track suited his style.

Control was occasionally a concern but Viljoen’s strike rate remained impressive as his career developed. He was second on the first-class wicket-takers’ list in the 2014-15 (39 wickets at 20.43) and considered moving to New Zealand at the end of that season to further his career but stayed to try and challenge for a spot in the South African team. He made a strong case when he topped the bowling charts in 2015-16 with 47 wickets at 23.02 and in a summer during which the South African attack was plagued with injuries, he was the obvious choice to step up.

Viljoen made his Test debut on his home ground, the Wanderers, for the third Test between South Africa and England. He hit the first ball he faced for four and then took a wicket with the first ball he bowled – that of England captain Alaistair Cook – but that was as good as it got. Viljoen ended with 1 for 94, South Africa lost the match and the series and he was not retained for the final match.

He played four county championship matches for Kent and traveled with the South African A side to Zimbabwe and Australia in winter 2016 and enjoyed a strong start to the 2016-17 season but midway through it, announced his decision to go Kolpak. Derbyshire valued his services, benefiting from spells of considerable hostility.