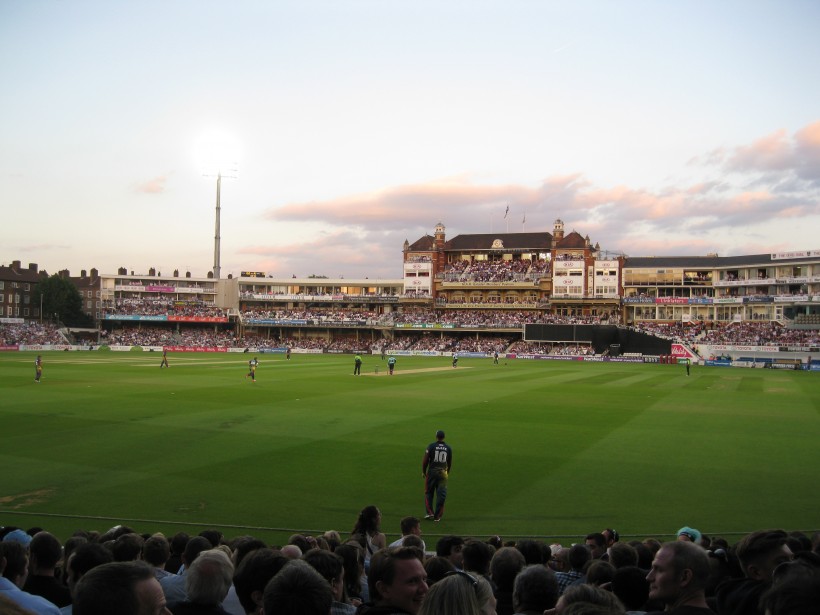 If you asked most Kent fans who they most enjoy beating the vote would probably be split between Essex and Surrey so for those attending the recent duo of T20 fixtures it proved to be a rather splendid couple of days.

In a competition expected to be dominated by the big city teams recruiting expensive global IPL-fresh guns for hire, unfashionable Kent without any overseas players and unable to command huge attendances of Friday night boozers are at the time of writing top of Group A (South) with twelve points from nine games!

Now obviously all bar Essex have at least one game in hand on Kent and the negative net run rate is a reminder that many of the victories have been nail bitingly close and a couple of the defeats, ahem, haven’t but it is refreshing to see the team more often than not making the most of their talents.

Now T20 continues to evolve, or should that be mutate? A decade ago the “par” score hovered around the 150-160 mark.

Since then it has edged ever upwards, 180 being the minimum to aim for on a true pitch with fielding restrictions last season.

However 2015 has seen a glut of runs with 200 now not being the once a year freak occurrence, but a realistic target both to set and even chase down.

Make sure you get 60 in the first six overs of power play and keep wickets in hand for the second half of the innings whereby ten an over is a minimum.

As for the boundaries, well with some brought in purists could argue the heavier bats and larger “sweet spots” are tipping the game too far in favour of the batsmen, but it is making for some stunning scores.

Kent’s campaign began with a gripping seven run win over Sussex where they strangled the reply by the visitors, they then upset the Sky Sports Hampshire show by winning at the Ageas Bowl, arguably the toughest ask on paper in the group stage.

The subsequent hiccup at Lord’s was brutal but they bounced back with verve against Surrey at Beckenham.

So far so good, but then something extraordinary occurred at Taunton. I wasn’t lucky enough to be there in person, but just sat dumbfounded as the score ticked over ball by ball on Cricinfo.

Northeast’s 114 was remarkable, ably assisted by Bell-Drummond’s 51 Kent contrived their highest ever T20 score of 227-7 from 20 overs.

Somerset would have set a new competition record chasing it down, but then they had a certain Mr Gayle in their ranks, albeit briefly.

The most famous T20 specialist on the planet finished unbeaten on 151 but remarkably, bewilderingly Kent triumphed by three runs.

Then Gayle set about Coles, the final four balls went 6, 6, 4, 6. Claydon had the honour of bowling the final over, it went wicket (Tanver), Overton 1, Gayle on strike needing 16 off four, 2, 4, ten needed off two balls.

I clenched my buttocks expecting the ball to disappear out of Taunton but a lovely, glorious, beautiful dot popped up on the ball by ball commentary and assuming no wides or no-balls it was game over.

Gayle duly launched the last ball for six but Kent had escaped with a famous win.

With Kent top of the table hopes were high with the visit of Gloucestershire to Beckenham but they somewhat took the wind from out of our sails with a nine wicket win.

Perhaps it was dose of reality for the Kent fans beginning to dream of a trip to Edgbaston, but rather worryingly the visit of fancied Hampshire a week later left everyone feeling a bit glum.

With a sharp shower reducing the game to 18 overs aside when Kent blasted their way to 183-5 (more than ten an over thanks to Northeast‘s 54 and Blake‘s 49) the hope was they would be able to squeeze and stifle Hampshire’s reply but instead they timed their reply perfectly, Vince the key man on 99* as they made it with a ball to spare.

Had our bubble burst? The fielding against Gloucestershire and the bowling against Hampshire had not matched our earlier standards.

The visit of perennial rivals Essex to Canterbury in front of the Sky cameras would go some way to answering the question.

Having inserted the chaps from the wrong side of the Dartford crossing Pettini’s lusty 56 helped them to a slightly below par 173-6.

Kent’s response after Denly’s early departure was superb, Bell-Drummond made a fine 61 but again it was Northeast that stole the show.

With Billings away on England duty the Kent captain is enjoying the form of his life.

The shackles have come off, his confidence has clearly never been higher, his range of shots, his power, his willingness to take risks, hit sixes and beat the field.

His 90 won the game to leave another excellent crowd delighting in beating the old enemy. The 18 off perennially grumpy Aussie Tait’s final over was a delight, as was his failure to stop the winning run off the first ball of the last over.

Kent followed it up with an equally impressive and just as satisfying win at the Oval.

Surrey might have the stadium, the Friday night audience, the budget and the ability to attract superstars but ultimately it was a very special night to be a Kent fan.

First though when you go to the Oval for one of their Friday night extravaganzas you have to be aware that half of the 20,000-plus crowd are not that fussed about the cricket.

It can be immensely irritating at times, one chap in our row got up 15 times in 40 overs (invariably in the middle of the over) either to go and buy a round of beers or relieve himself of the inevitable after effects.

The Mexican waves illustrated their indifference to events on the field as did the karaoke anthems and the inevitable hide and seek, catch me if you can games involving beer-snakes and comedy stewards.

It would have been a tiresome evening had it not been for two rather crucial factors. Firstly Kent won, and secondly they did it by scoring their record ever T20 score!

Well it was amazing. I was rendered almost speechless by the end. If someone had said 12 years ago when T20 started I’d be watching Kent score 231 in 20 overs including 26x 4’s and 8x 6’s in front of over 20,000 spectators at the Oval I’d have laughed at you.

The ball was flayed to all corners, spectators tried to catch some of the sixes for a cash prize, one chap on the second tier of the pavilion did so to a great cheer amid the boozy run-filled carnage.

Surrey would have had to break all sorts of records to chase the target down, Wilson and Tom Curran made it respectable but the thousands of Kent fans in the crowd were able to relax long before the end.

Inevitably Stevens took four wickets just for good measure in a 54-run win. It leaves Kent probably needing two wins from their final five games to make the last eight. Three might even secure a home quarter-final, but we shall have to see.

It is certainly one in the eye to the advocates of “franchising” and big city teams with only Warwickshire of the traditional “big teams” and Durham and Hampshire of the modern wannabes in the eight qualifying spots at the moment.

Surrey have no desire to compromise their brand in the medium future if they can already sell out the Oval as “Surrey” rather than “Surr-ex” or “Surr-ent“!

No doubt they wouldn’t mind “borrowing” a couple of our home grown players but we’d rather retain our identity, history, players, own fanbase and ultimately our integrity thank you very much.

Amid the fun of the T20 though it has to be said our Championship form has been the opposite.

I was in Dublin for the first two days of the Derbyshire game and have to admit was somewhat shocked to be left with a hour or so of play to watch on day three!

Likewise to lose within two days of actual play at Northampton to leave us bottom of the Championship is pretty horrible.

This Jekyll and Hyde contrast between the two competitions is baffling.

You’d think some of the form and confidence from the Oval might have rubbed off in the Championship but sadly no. I appreciate both formats and both competitions, but ultimately five defeats in eight is not really good enough.

Having a Blast at Beckenham