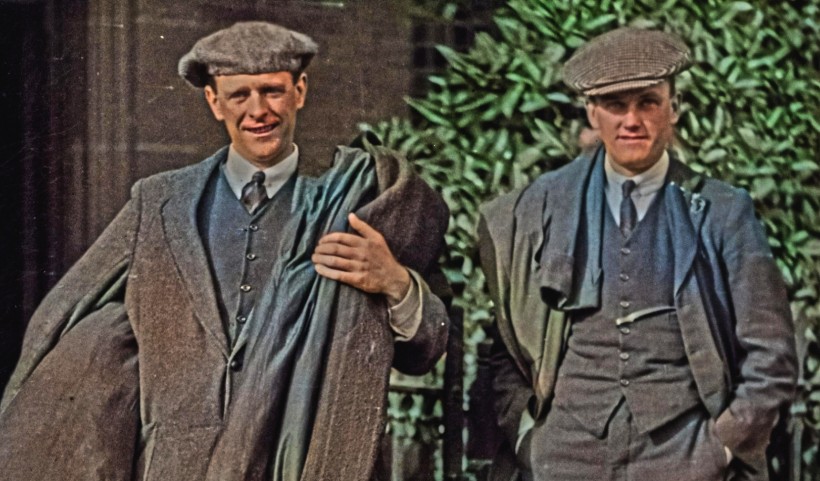 Pictured above is a colourised photograph of Kent star Colin Blythe (R) and Northamptonshire’s Claud Woolley (L), brother of Kent legend Frank, in Tonbridge. This photograph was taken on the day they both enlisted for the Kent Fortress Engineers (KFE) on the outbreak of the First World War in July 1914.

As we once again reflect on Kent Cricket’s tragic loss of life during the First World War, this years’ tribute to the fallen in “the Great War” features Kent Cricket’s association with a particular unit, the now inactive Kent Fortress Royal Engineers.

The two cricketers pictured, alongside Blythe’s Kent teammates at the time, Henry “Harry” Preston and David Jennings, all signed up to join the KFE – a volunteer Territorial Army unit.

Blythe, Preston and Jennings all missed Kent’s final game of the 1914 season against Hampshire at Dean Park in Bournemouth after enlisting. They were later joined in the KFE by their teammate, Bill Fairservice.

All four aforementioned had been part of Kent’s County Championship winning sides of 1909, 1910 and 1913.

In October 1914, they were posted to the Woodlands depot in Gillingham. According to the Tunbridge Wells Advertiser, who sent a reporter to see them off, Blythe was the “life and soul of the party”.

Promoted to Corporal at the end that year, and Sergeant in 1915, Blythe remained at Gillingham for two years with 2/7 Reserve Company working on coastal defence and construction tasks.

While at Gillingham, Blythe was involved with Woolley and Fairservice in the formation of the Kent Fortress Engineers cricket team, which, with seldom fewer than four county cricketers, proved too strong for much local opposition.

In their first game, when a Royal Engineers side was beaten by an innings, he took 3/33 & 4/3, followed by 7/36 against a South African Eleven at Gravesend. Blythe also had match figures of 14 for 85 v Chatham Garrison.

Following the introduction of conscription in 1916, all Territorials were obliged to sign Imperial Service Forms and became liable for service overseas.

Early in 1917, Blythe and Woolley were among a party posted to Marlow for further training prior to posting.

While there, Blythe, Woolley, Jennings and others played for the Royal Engineers (East Anglia) cricket team. Unsurprisingly, Blythe was too much for the opposition – 9/33 v RNAS (Transport), 7/26 v RE (Regent’s Park), 7/13 v Royal Naval Division.

He played his last matches at Lord’s for the Army & Navy v Australian & South African Forces for Lady Lansdowne’s Officers’ Families Fund in the summer of 1917.

That September, a party of Kent Fortress Engineers from Marlow, including Sergeant Blythe and Corporal Woolley, were among 277 soldiers who sailed to France as reinforcements for the 12th (Pioneer) Battalion of the King’s Own Yorkshire Light Infantry (31 Division).

Arriving in early October, the new draft was posted to Watou for a course in light railway construction and maintenance, an activity in which the 12th Battalion specialised.

On rejoining the Battalion, B Company began work on the Wieltje (Forest Hall) and Bedlington lines near Passchendaele.

On the night of November 8 a shell from a long-range gun burst above a working party killing three, wounding six with one missing. Sergeant Blythe was killed instantly by shell splinters, Corporal Woolley was among the wounded. Blythe left an estate valued for probate at £2,828.13s 8d.

David Jennings was regarded as a fine right-handed batsman. Whilst on active duty on the Western Front towards the end of the war, Jennings’ unit was attacked with mustard gas, which gravely injured him and also brought on shell shock from the ordeal. He was invalided back to England and died of his injuries at Tunbridge Wells in August 1918, aged only 29.

Both Blythe and Jennings are commemorated on the Colin Blythe Memorial at The Spitfire Ground, St Lawrence in Canterbury.

Captain, East Kent Regiment. Posthumous Military Cross “for conspicuous gallantry in leading his company… in spite of the fire of hostile machine guns, he got his men forward, exposing himself [to fire] selflessly”. Died in action aged 31.

Lieutenant-Colonel, East Surrey Regiment. Died instantly when shot in the head after going ahead of his men to reconnoitre higher ground, aged 38.

Captain, 16th Battalion, Middlesex Regiment. Killed in action on the first day of the Battle of the Somme, aged 21.

Stevens masterclasses opened up to adults

Westlife to play at The Spitfire Ground next Summer