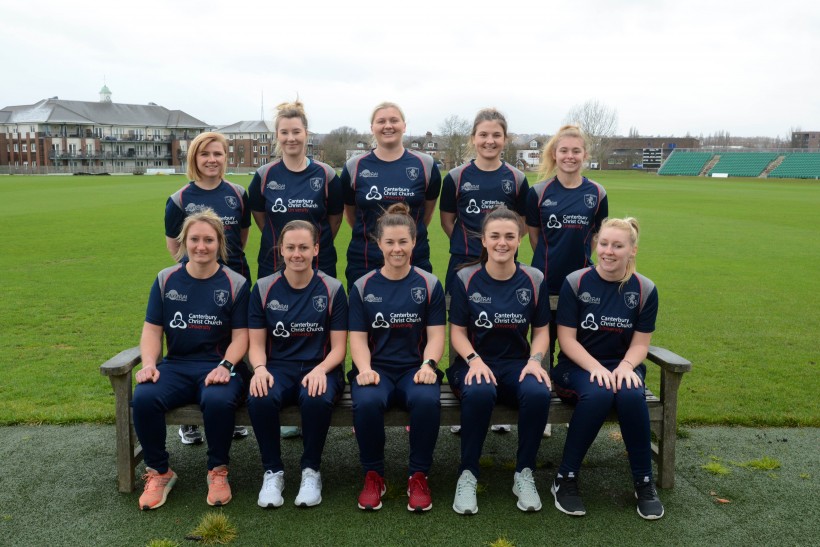 Successive wins away at Yorkshire and Lancashire over the Bank Holiday weekend saw Kent Women win their eighth Royal London Women’s County Championship title after winning every game in the competition with one fixture left to play in the competition.

On Sunday, ‘The Horses’ came out victorious by just five runs against Yorkshire at Harrogate. After the hosts won the toss and elected for field following a rain delay, the match was shortened to 36 overs per side.

Kent got off to the worst possible of starts as skipper Tammy Beaumont was dismissed LBW by England teammate and fellow World Cup winner Katherine Brunt for a four ball duck in the first over.

After Alice Davidson-Richards (b Kasperek for 4) also fell cheaply leaving Kent on 26/2, Fran Wilson and Maxine Blythin put Kent back on the right tracks with a third wicket stand of 55 before wickets fell at a steady pace. Kent managed a total of 121 all out in their 36 overs.

With the ball, a solid start from Yorkshire was ended by all-rounder Laura Marsh as she took the wicket of wicketkeeper-batter Lauren Winfield for 20, Lauren Griffiths taking the catch. Off-spinner Megan Belt then took to Yorkshire’s middle order, running out Freeborn (13) and also bowling Kasperek (0) and expertly dismissing MacDonald caught and bowled for three.

Great bowling to scupper Yorkshire’s scoring rate from all of Kent’s bowlers including Hannah Jelfs conceding just nine runs from her nine overs, including one maiden, and Chelsey Rowson letting only 14 runs slip from her seven overs, saw Yorkshire end five runs short of their target after their 36 overs. Belt finished with figures of 3/20, Jelfs (1/9) and Davidson-Richards (1/34) also in the wickets.

Victory at Yorkshire meant that a win at Lancashire on Monday after the journey from the White Rose county to Newton-Le-Willows would seal Kent’s first County Championship title for three years.

The game started unaffected by weather with Kent winning the toss and electing to field. Alice Davidson-Richards made the first breakthrough for the visitors, taking the scalp of Lancashire captain Evelyn Jones for 6, caught by Laura Marsh.

Emma Lamb and Georgie Boyce (45 stand) rallied for the hosts before Chelsey Rowson took the first of her four wickets in the match, getting Lamb for 33, caught by skipper and wicketkeeper Tammy Beaumont.

Rowson then also dismissed Boyce for 20, also caught behind, before excellent bowling saw wickets spread around the Kent attack, including Kalea Moore’s first wicket in a Kent jersey after her debut the day before, getting England international Sophie Ecclestone, caught by Maxine Blythin.

Lancashire’s tailed showed little resistance and the hosts were all out 161 after 49.2 overs. Rowson was the pick of Kent’s bowlers with figures of 4/24.

In reply, an opening stand of 48 between Beaumont and Davidson-Richards put Kent well ahead of the required rate to set up an almost formulaic Kentish batting innings. No batter scored less than fifteen runs each as Fran Wilson finished top-scorer on 54 not out with four fours as Kent reached their target of 162 after losing only four wickets and in 43.5 overs.

This result means that Kent Women now cannot be caught in the Royal London Women’s County Championship Division One title race, bringing the trophy back to Kent after a three year absence and still with one game to go.

Kent Women’s final match will be a local derby clash against Sussex hosted at The Spitfire Ground, St. Lawrence in Canterbury on Sunday 2nd June, where they will be crowned champions in front of a home crowd.

Buy tickets in advance or purchase tickets on the gate for £5 – entry is free for ALL Kent members and package holders and this fixture does not count towards one day’s worth of cricket in the Six Pack package. 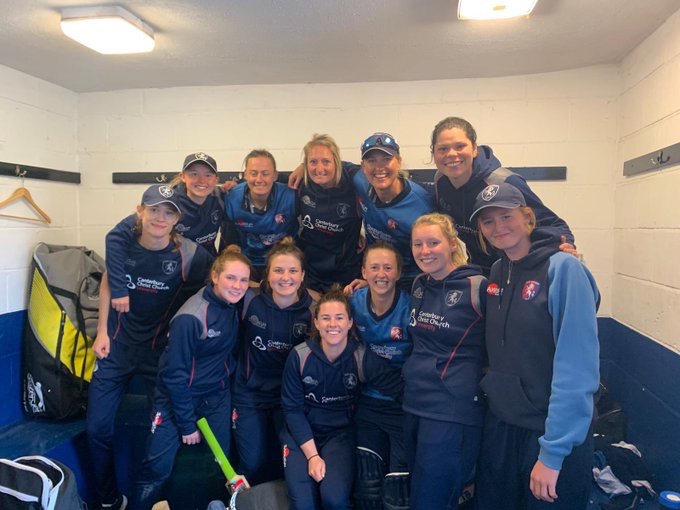