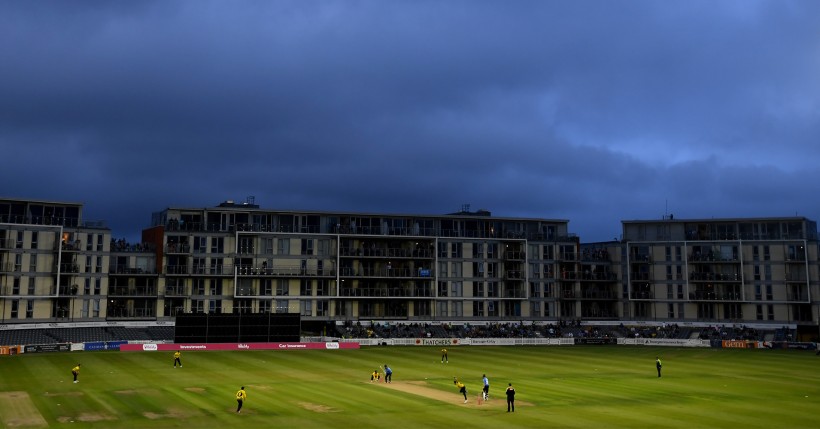 David Payne produced his best white ball bowling performance of the season to inspire Gloucestershire to a six-wicket victory over South Group rivals Kent in the Vitality Blast match at the Seat Unique Stadium in Bristol.

Payne returned impressive figures of 4-15, including a burst of three wickets in four balls, as Kent were bowled out for 114 in 19.3 overs.

Fellow seamer Zak Chappell claimed 3-24 and slow left-armer Tom Smith weighed in with 2-22 as Gloucestershire exerted a stranglehold in the field to make it two wins from four outings in the short format. Only Jordan Cox mustered any real kind of resistance, the 21-year-old forging an innings of 48 from 47 balls, with a six and 4 fours.

Gloucestershire’s chase was initially hampered by the loss of early wickets, but overseas star Glenn Phillips eventually took a firm grip on proceedings, smashing an unbeaten 50 from 31 balls and accruing 4 fours and 3 sixes as victory was achieved with 5.3 overs to spare. Jack Taylor also played his part, making 31 from 21 balls with five fours in an unbroken stand of 70 for the fifth wicket.

Payne opened up with that greatest of T20 rarities, a wicket maiden, persuading Joe Denly to sky a catch to Ian Cockbain at backward square leg and immediately justify the decision to insert Kent.

Making the most of a dry pitch to extract turn, slow left-armer Tom Smith accounted for Daniel Bell-Drummond, who drove uppishly to mid-on, at which point the visitors had lost both openers inside four overs and surrendered the initiative.

An obvious dangerman, Sam Billings threatened to break loose after the powerplay yielded just 36 runs, the former England man using the reverse sweep and paddle shots to good effect to race to 22 from 18 balls. There was palpable relief within Gloucestershire ranks when he attempted to sweep Chappell and top-edged to Smith at deep fine leg with the score on 56 in the ninth over.

Smith then pinned Alex Blake in front without scoring to finish with 2-22 from four overs, while Benny Howell also kept things tight in the middle, conceding just 20 runs as the visitors limped to 59-4 at halfway.

Kent succumbed to mounting pressure thereafter, Jack Leaning pursuing a wide delivery and nicking behind and George Linde holing out to long-off, both off the bowling of the admirable Chappell.

Cox remained Kent’s last hope of posting a challenging total, but the return of Payne at the Ashley Down Road end swung the contest decisively in Gloucestershire’s favour. The experienced left-armer had Cox held at the wicket for 48, dismissed Grant Stewart in identical fashion next delivery and then induced Qais Ahmad to hit to deep mid-wicket in a devastating burst of three wickets in four balls at the death.

If Gloucestershire supporters in the audience assumed victory would be a formality, they were soon disabused of the idea, Australian-born seamer Stewart accounting for Miles Hammond and Ian Cockbain in successive deliveries in the second over to serve notice that Kent were not prepared to lie down. When Bracey miss-timed a drive and hoisted Matt Milnes to cover, the hosts were 35-3 at the end of a powerplay that raised more questions than answers.

Higgins was next to go for eight, smacking a delivery from Linde straight to backward point as Gloucestershire slipped to 46-4 in the eighth over. Unperturbed, Phillips continued to carry the fight to Kent, the New Zealand international smiting Qais Ahmad for a huge straight six and then pulling him for four later in the same over as he began to dominate.

He found a willing ally in Taylor, who located the gaps to rotate the strike, Gloucestershire’s captain playing an effective second fiddle in a partnership that served to calm any nerves. Both helped themselves to two boundaries apiece in a Fred Klaassen over that leaked 17 runs, and victory was assured in the 15th, with Phillips striking successive sixes off Linde to bring up 50 in the grand manner.

Speaking to Sky Sports, Kent Captain Sam Billings said: “We couldn’t find our way and didn’t adapt quick enough – 140 or 150 may have been closer. I thought we could’ve had a sniff but we couldn’t break the partnership.

“One or two overs could really have changed the game – today it wasn’t meant to be. T20 cricket is a brutal game when it’s going poorly, but it’s great when it’s going well.

“Of course, people who know me know I hate losing a lot, like most professional sportspeople. It’s a big challenge both for me and our leadership group now on how we’re going to turn this around.

“It’s definitely not over – we’re going to have to work pretty quickly but that’s a challenge for both me as a leader and for the lads to take on.”

On defeat at Bristol in particular, he added: “It was a poor pitch, and there’s no getting away from that. But there are no excuses – we didn’t execute our skills well enough and that’s been a recurring theme this season.

“Had we made 140, we would have been right in the game, but we fell short and lost too many wickets early on. We know what to expect when we come here, yet we keep falling into the same trap.

“I had to take a gamble with the ball and try for early wickets, because they were always going to win the game easily if they batted their 20 overs. Had we got Glenn Phillips out early, then who knows.”

Extra rail services will be running between Canterbury East & London Victoria after Friday’s match, ensuring Metropolitan Kent-based supporters will be able to enjoy the ‘Oldest Rivalry’ until its conclusion.

Kent Cricket’s Ticket Office situated at The Spitfire Ground, St Lawrence will also be open from 10:00 until 14:00 this Thursday & Saturday to deal with any ticketing enquiries. 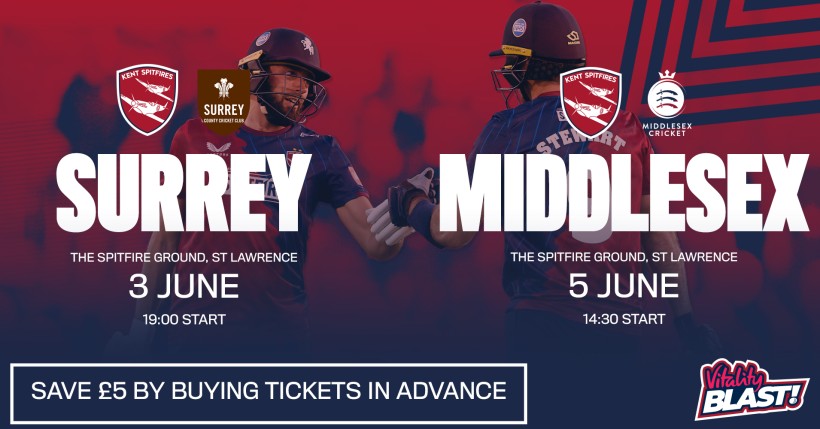 Kent stars past & present to take part in Festival of Cricket