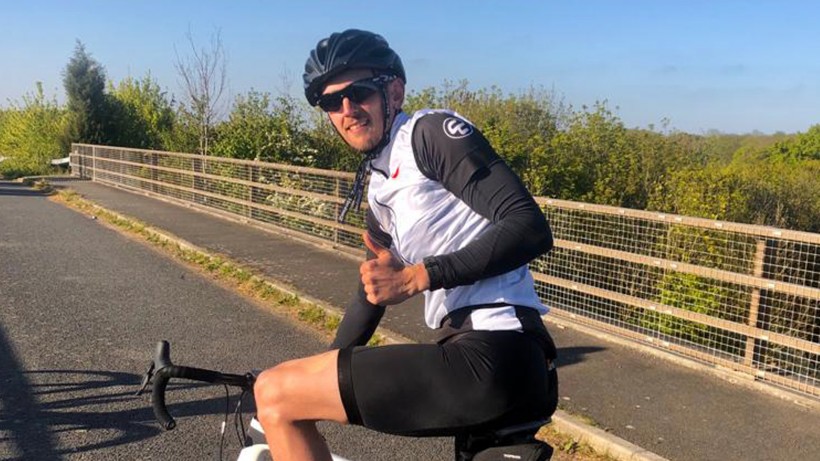 Kitted out from top-to-toe in Lycra, wearing an aerodynamic helmet and riding a hi-tech Chris Boardman lightweight carbon-fibre bike, Harry Podmore cuts every inch the willowy, athletic figure of a professional cyclist – the only issue is – he’s a fast bowler for Kent.

Throughout the Coronavirus lockdown, the 25-year-old seamer has been spotted out and about on the highways and byways of his adopted county, churning out the miles in a bid to keep fit for the start of what is certain to be a shortened domestic cricket season.

Since moving to Kent at the start of 2018, the uber-enthusiastic Podmore quickly won the hearts of the county’s supporters with wholehearted performances and by taking 43 wickets in his debut first-class season for the county. He backed that up with 52 championship wickets last term, to finish sixth in the national bowling averages and earn his county cap.

With a grin and a cheeky comment never too far from his lips, Podmore says he’s ready to ditch the cycling gear in favour of his cricket whites and bowling boots.

“But cycling is fun for me in a different way and the computer on my bike tells me I’ve ridden over 1,500 during the lockdown. I’ve not set targets – I just get up and go when I feel like it.

“The longest trip was to London and back, which took almost 10 hours. I wanted to mentally test myself that day, just to see if I could do it.

“I’d like to get into cycling for charity. The Professional Cricketers’ Association hold a sponsored ride at the end of every season when players and coaches cycle round the county grounds. I’ve never done that yet, but I’ve expressed an interest in doing it this year.”

Podmore added: “I’m fully aware that I play a running-based sport but, just to keep fit, I much prefer cycling to running. To be honest, I find running a bit boring if I’m not bowling a cricket ball at the end of it, but with cycling I can replicate the leg work comparable to a full day in the field with much less impact on my knees and hips.

“Driving to and from cricket grounds you’re in autopilot some of the time and you don’t really see much, but with cycling, I decide how many miles I want to ride and my bike computer sets out the route for me. As a result, I’ve seen some really picturesque little places around Kent in recent weeks that I wouldn’t have visited otherwise.

“I don’t think I’d ever join a cycling club. Some of the semi-competitive cyclists I’ve seen out on the road are absolute freaks when it comes to aerobic fitness. I don’t think there would be too much point in me trying to compete with some of those guys.”

Having spent the best part of three months on furlough from Kent and sharing lockdown with his girlfriend, Michaela at their home near the Kent coast, Podmore is now keen to get back into the ‘cricketing saddle’ so to speak.

“It seems so long since I bowled a ball in anger,” he explained. “We went over to South Africa on pre-season tour in February, but that got cut short after five days, and I’ve not really bowled since.

“The one good thing about the trip was getting to meet Simon Cook, our new bowling coach. I was just so happy with the way he coaches people and I’m delighted to have started that relationship with him.

“It’s the first time I’d met ‘Cooky’ but I’d heard a lot about him. When I came to Kent Allan Donald was our bowling coach, but when Twenty20 came into the conversation Matt Walker was talking about people’s roles in the short-form game and said that he saw me doing a job similar to ‘Cooky’, who’d been a real success in the Spitfires side of 2007 and 2008. He said ‘Cooky’ kept it simple, accuracy was the key, and that he sees me playing that sort of role in the future.

“Like me, ‘Cooky’ moved from Middlesex to Kent and I’m really excited to be able to tap into his knowledge now. If I can do that, then there’s every chance I can enjoy a decent career like he had.”

After taking almost 100 first-class wickets in his first two seasons at Kent, Podmore quipped: “I’d have liked 100 – with the bat I mean!

“Seriously though, you’re always apprehensive when moving clubs. I hadn’t reached my own expectations bowling for Middlesex and knew I needed a fresh start and more opportunities.

“From having made three or four first-class appearances for Middlesex, I’ve gone on to play every championship match Kent have played in the last two years and I’m really proud of that.

“For me, it’s all about feeling a part of something good. Sport can be so cutthroat and tough sometimes, one minute your up, the other right down. So, every sportsman wants the chance to play a run of consecutive games, to be given chance to express themselves and see how they come out of it at the other end. Kent have given me that chance.

“I think I surprised a few as to how well I did in my first season. After that, Paul Downton called me in to talk about 2019. There were doubts over Stevo’s contract talks and Mitch Claydon was picking up a few knocks, so Paul asked how I’d feel about leading the attack?

“I thought, ‘well, that’s the sort of thing you only ask of someone you really trust’ and, possibly, even without knowing it, that gave me such a confidence boost and I went on to take over 50 wickets last season.”

With the end of lockdown looming, Podmore looks back fondly to the happy hours spent on his bike and a few other quirky past-times aimed to simply pass the time.

He added: “I’ve been baking and cooking with Michaela, but the most unusual thing we’ve done was to play marbles one night. I didn’t know it was a game as such, but we found a bag of marbles and she taught me how. You could say, I spent a night losing my marbles!”

Kent’s England stars come together for ‘The Spitfire Sessions’

Updated guidance for return to activity in a club setting