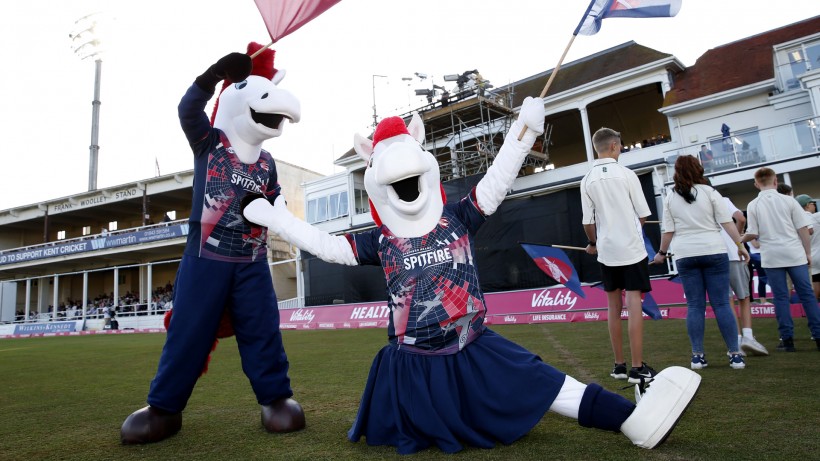 The Professional Cricketers’ Trust is set to take centre stage on Vitality Blast Finals Day this Saturday, with the Mascot Race headlining the fundraising activities that will be taking place on the day.

For the second year in succession, one of the biggest days on the domestic calendar will see both funds and awareness raised for the players’ charity as Edgbaston Stadium prepares to play host to Finals Day.

The Trust has strong links with a number of current and former Kent players, including Alan ‘Iggy’ Igglesden, who revealed his inspirational story to the charity earlier this year.

In addition, former fast bowler Robbie Joseph is set to appear in a new video put together by the Trust on Saturday morning which features a number of current and past players outlining the importance of positive mental health and seeking the right support.

Other fundraising activities on Saturday are set to include:

You can support Victa and Victoria during the Vitality Blast Mascot Race by donating £5 to the Trust to be in with a chance of winning 2022 Blast tickets.

On Saturday, mascots from up and down the country will be limbering up to take part in the prestigious annual race, but this time there’s a difference: they will be raising money to support those who need it most.

Getting involved is simple. Just text VICTA or VICTORIASF to 70085 to donate £5 (not including the cost of one text message at your standard network rate) to the Trust and you’ll be entered into a prize draw to win tickets for next season’s Vitality Blast.

Neutral fans can also support Twinkle, the official mascot of the ECB’s All Stars Cricket programme, by texting TWINKLESTAR to 70085 to be in with a chance of winning tickets to see a team of their choice.

Participants may enter as many times as they wish, and the winners will be announced on social media on Monday 20 September, when the Trust will also contact them directly.

The Vitality Blast Mascot Race brought to you by the Professional Cricketers’ Trust is one of a number of activities taking place on Saturday to raise both funds and awareness for the Trust.

A number of the charity’s beneficiaries – both current and former players – will be there on the day to talk to the media and fans about the support they have received from the Trust.

In addition, supporters will be able to take part in an online auction, where you can bid on items including a bat signed by the 2019 ICC Cricket World Cup winning side and a limited edition signed photograph of Ben Stokes following his Headingley heroics later that same year.

You can also text to donate to help the charity continue its life-changing – and often life-saving – work or visit the charity’s dedicated JustGiving page to make a one-off donation.

Since 2015, 460 individuals have been supported by the players’ charity in the area of mental health alone, including 94 during a record-breaking 2020. Support offered by the Trust can include mental health treatment, funding towards specialist medical treatment or equipment, hardship support and direction or advice in difficult situations.

Visit the Trust’s website to find out more information on the charity’s wide-ranging work.

Please do consider supporting the Trust this weekend – it really will make a difference to those who need it most!

Vitality Blast Finals Day 2021 is supporting the players’ charity: the Professional Cricketers’ Trust. Saturday 18 September will see a day of fundraising and awareness for the Trust on one of the biggest days of the domestic calendar at Edgbaston. Visit bit.ly/DonateFinalsDay to find out more and make a donation.

Walks: “I couldn’t ask for a better group of players”