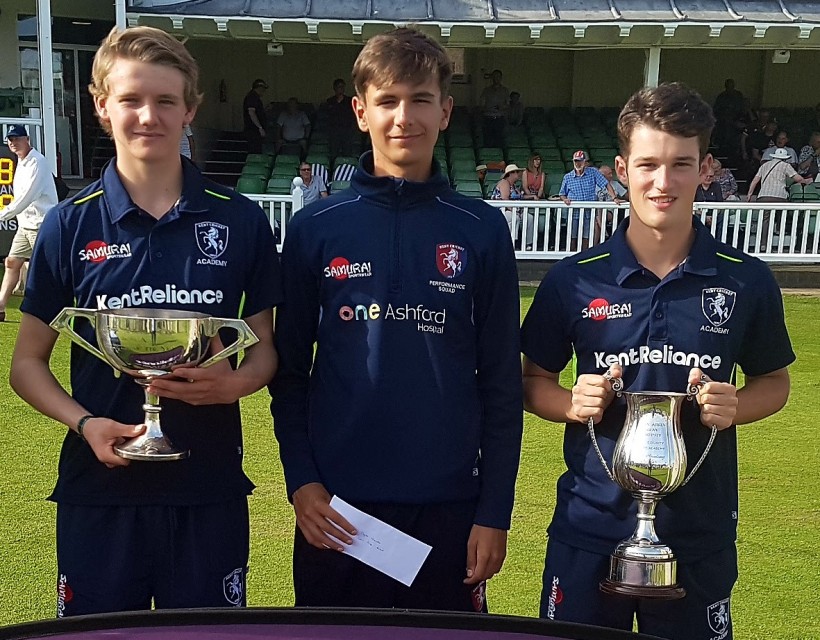 A trio of promising cricketers were recognised at the annual Kent Cricket Academy awards.

The John Aitken Gray Trophy was presented by Myrna Gray in memory of her late husband to wicketkeeper-batsman Ollie Robinson, has been a regular in Kent’s second XI, top-scoring with 114 against Sussex.

Ollie has represented England Under-19s in one day and Test series against India Under-19s this summer and has also made his List A debut for Kent on the FGS Plant Tour to the West Indies.

He plays his club cricket at Beckenham CC and attends Chislehurst and Sidcup Grammar School and follows current first team stars who received the award including Daniel Bell-Drummond, Adam Ball and Alex Blake.

The Colin Page Scholarship, presented in memory of the former Kent player and coach, was presented to Under-17 bowler Taylor Chandler.

Colin coached many cricketers over the years, but his love for developing young homegrown talent saw him spend many hours during the winter months in the Indoor Schools at both Canterbury and Sevenoaks.

Taylor plays at Chestfield CC and attends Canterbury Academy. He is a talented right-arm seamer who was identified by the Kent U17 Performance Squad Coaches as an individual who has shown a high level of commitment towards his cricket during the winter training and summer match programme.

Highlights for Taylor have included, a match winning 5 wickets v Surrey in the ECB U17 One-Day Cup and he was leading wicket-taker for the U17 team.

Taylor has also recently returned from the national U17 Super 4s competition having been selected for the London and East team.

He received the award from Robert Gurr from our Academy programme sponsors Kent Reliance.

The George Pope Memorial Cup is awarded the late teacher in South East London, who became a skilled identifier and developer of talented young cricketers within London Schools Cricket Association in the 1940s.

When he died in 1975, a Cup was purchased by his wife Edna to be awarded annually to a player who had contributed to Kent Schools teams over several years and is now awarded annual to an Outstanding Kent U15 boy.

The award this year goes to Joe Gordon, a talented batsman from Canterbury who attends St Edmund’s School. Joe has represented Kent U15s, who were ECB national champions, and the Kent U17 squad.

On his debut for the U17 team, Joe scored 88 and 31 against a strong Middlesex team and was also selected for the Bunbury Festival for a second successive year.