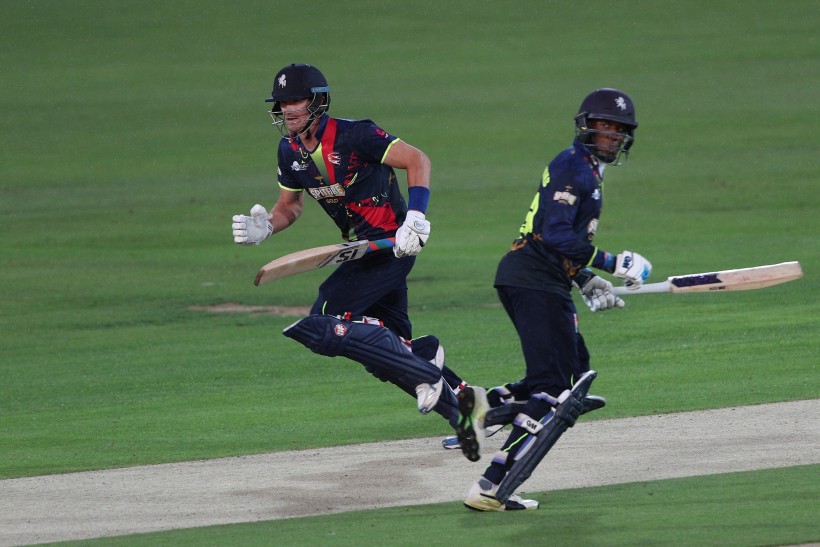 Joe Denly hit a career-best T20 score in the world’s highest opening T20 stand with Daniel Bell-Drummond as the Spitfires won by 11 runs to keep their NatWest T20 Blast season alive against Essex Eagles at Chelmsford.

Calum Haggett took 1/18 in a fine four-over spell as it rained boundaries in an entertaining advert for county cricket.

Click here to pre-buy tickets to save time & money

Denly led the carnage with 127 from 66 balls, including 11 fours and seven sixes, beating his own Kent record score of 116*. The stand with Bell-Drummond (80*) was worth 207, the third highest for any wicket in T20 cricket worldwide.

It also beat the 163, a Kent record for any wicket at the time, the same two batsmen put on earlier in the season against Surrey at The Oval.

However, they were run close by the north Thames team, for whom Varun Chopra hit a career-best T20 114, his second of the season. His 58-ball innings included nine sixes and six fours. When he was out in the 18th over, Essex were 29 runs short with two overs to go, and they finished 11 runs adrift.

Kent now know that a third victory in a row on Friday night against Surrey at Canterbury will take them through to the last eight. Essex also require a win at Hove against Sussex to stand any chance of making the top four in the ultra-tight south group.

For Essex, only Mohammad Amir, who finally removed Denly in the penultimate over, returned decent bowling figures – his four overs cost a comparatively parsimonious 20.

Of Essex’s seven bowlers, only Ravi Bopara went for less than 10 an over after the start of play was delayed for 20 minutes while the air ambulance landed on the outfield.

Put in, Denly started as he meant to go on, contributing 37 of Kent’s first fifty runs including sixes over cow and long-leg off Jamie Porter and Paul Walter respectively. The former Middlesex opener reached the 23rd T20 half-century of his career from the 27th ball he faced.

Denly’s third six came from a free hit after an inadvertent beamer from Walter, the ball being lost as it sailed out of the ground over midwicket. A fourth cleared the ropes in the same vicinity in an over that went for 22 runs and took Kent into three figures in 12 overs.

Bell-Drummond had played second fiddle to his older partner, but a six off Simon Harmer took him to 37 and past the previous first-wicket partnership record of 119 for Kent against Essex in the format.

A swept four off Ryan ten Doeschate took Bell-Drummond to his fifty from 35 balls, and he had a second six to his name in the same over for good measure.

Denly reached his second century of the campaign with a boundary past mid-off. It had taken him 54 balls and contained 10 fours and a fifth six the ball before, hit straight off Zaidi. Another six took Denly to the highest of his three T20 centuries.

There was drama when the world record was broken: it looked at first as if Denly had gone on 119 to a catch on the long-leg boundary by Ryan ten Doeschate who crossed the rope as he gathered the catch. Denly was not only reprieved, but credited with his seventh six.

He was finally out in the 19th over when he went for another big hit against Amir and was caught behind by James Foster. Kent lost a second wicket in the final over when Sam Billings was caught behind to give Walter his 15th wicket of the season, but at a personal cost of 65 runs on the night.

Essex went off like an express train in reply. By the end of the powerplay overs, they were 94 without loss and Chopra had reached his half-century from 19 balls.

Mitchell Claydon felt the force in the sixth over when Chopra hit him for three successive sixes followed by three fours to move Essex from 64 to 94 in six balls.

Chopra had already hammered two sixes before that in the previous over from Claydon, whose first two overs went for 46. Sixes number six and seven came off successive balls from Imran Qayyum over long leg and then straighter.

Having put on 118 for the first wicket in nine overs, Dan Lawrence departed for a 22-ball 41, with one six, bowled by Calum Haggett. But at the halfway point, Essex needed 95 from 10 overs; incredibly, they were 34 runs ahead of the Kent total at the same stage of their innings.

They lost Bopara on 138, caught sweeping at Qayyum at short fine leg, as the brakes were applied to the Essex charge. Only 37 runs were scored in the six middle overs from the ninth to 14th and the pressure got to Zaidi who holed out to deep square leg in Darren Stevens’s first over.

A straight six off Neesham, his eighth, took Chopra to his century from 52 balls with six fours. With 39 needed off 18 balls, Chopra carted Neesham for six over midwicket before exiting two balls later, caught in the covers.

Ten Doeschate chipped a six over square leg off the last ball of the 19th over to leave Essex needing 16 from the last six balls. The captain went to the second ball, caught at deep cover by Qayyum, and Adam Milne tied up Paul Walter and James Foster in the final four balls.

Click here to pre-buy tickets to save time & money