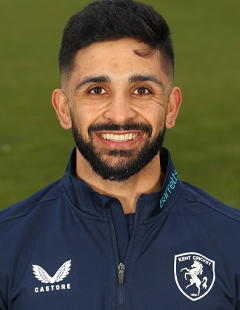 Hamid Qadri joined Kent on a three-year deal ahead of the 2020 season.

Born in Afghanistan but raised in Derby, Qadri made his first-class debut for Derbyshire at the age of 16 in 2017.

He made his England Under 19s debut in August 2017, before featuring in the Under-19s World Cup.

Qadri made his Kent debut in the Bob Willis Trophy against Essex in 2020 finishing with match figures of 1-58, as Kent lost by  two wickets in a tightly fought Battle of the Bridge.

In April 2022, Qadri achieved new career-best first-class bowling figures of 6-129 against Lancashire at The Spitfire Ground, St Lawrence. In the very same match, his second innings knock of 77 gave him his first half century in his first-class career.