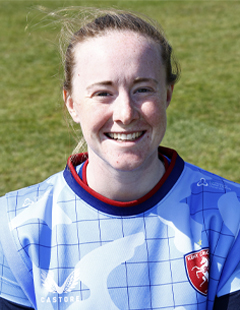 Kirstie started playing cricket for Huntly Cricket Club in Aberdeenshire, Scotland, and aged 14, she took four wickets on debut for Huntly’s Men’s first team. Soon after, she made her Scotland debut, against Gloucestershire in 2012 and was a regular for Scotland up until 2017.

In 2017, she played for Scotland in the Women’s Cricket World Cup Qualifier, where she took eight wickets and was Scotland’s leading wicket taker. Sarah Bryce also featured in the Scotland squad.

After this tournament, though, she was offered a part-time contract with Loughborough Lightning for the 2018 Super League season. Despite Scotland being an Associate nation, Kirstie had to sacrifice playing for Scotland in order to accept the contract because of the ECB’s registration regulations. She would have been considered an overseas player and Loughborough had a full allocation of overseas stars.

The sacrifice paid off, however, and she debuted for England in 2018 and has since played for England in Women’s Test and T20I cricket, making her Test debut against Australia, taking the wickets of Alyssa Healy and Meg Lanning on her way to match bowling figures of 3/119.

The 23-year-old featured for Nottinghamshire Women for three years from 2016, taking 6 wickets in 5 Women’s Royal London County Championship matches in her last season and 8 wickets in 4 National T20 matches in 2019 at a bowling average of merely 6.50 and economy of just 3.71, taking a wicket, on average, every 10.5 deliveries.

Gordon has also played five T20Is for England so far in her career, taking eight wickets at a bowling average of 12.25, with best figures of 3/6 on debut against Bangladesh in November 2018.

For Notts, she finished 2019 as the National T20 competition ninth highest wicket-taker in Division One, despite bowling far fewer overs than her counterparts in the top ten.

Gordon has also featured for the Loughborough Lightning in the Kia Super League (KSL), taking 37 wickets in 25 career KSL appearances at only 14.48, with best figures of 3/13 against the Surrey Stars in August 2018.