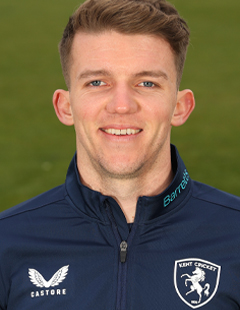 Milnes joined Kent from Nottinghamshire before the start of the 2019 season, and proved to be another inspired signing by the Club’s recruitment hierarchy in Paul Downton, Matt Walker and Sam Billings.

Milnes had a breakthrough season in 2019, taking 58 First Class wickets at 25.48. His best figures of 5-68 came against his old club Notts, as he dismissed Ben Duckett, Joe Clarke, Samit Patel, Steve Mullaney, and James Pattinson.

He also claimed 5-79 vs Hampshire on his List-A debut in the Royal London One Day Cup. This good form with the ball culminated in a call up to the England Lions for their tour of Australia that Winter.

2021 was a stand-out season for the seamer, a Summer that culminated in Vitality Blast victory and Milnes being awarded Kent Cap no. 220 during their County Championship match with Worcestershire.