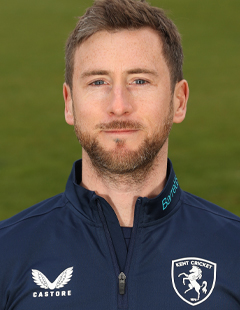 In a positive attempt to boost performances out in the middle, Kent Cricket recruited one of cricket’s top analysts, Michael Najdan, and are hoping his up to the minute data will have an immediate impact. Michael joined the backroom staff in 2014 to support the coaching staff as data analysis grew to be an important part of modern-day sport. Michael joined Kent in pre-season from Opta where he was responsible for the analysis of all county cricket and International matches and previously worked for Cricket Australia, ESPN Star Sports and Notts County Football Club.

Since 2014, Mike has become a valued member of the backroom staff. He creates a detailed dossier on the opposition and their batsmen and bowlers before every fixture, and works closely with Matt Walker and Paul Downton when it comes to assessing new signings and making recommendations, while also providing current squad members with information to further their own games.

‘Naj’ has one of the most high-pressure jobs and has to concentrate on every ball bowled, every shot made, every ball fielded, every catch taken and missed, every wicket and every field placing during a day’s play, all in the blink of an eye. His position on the players’ balcony, with a camera situated in the pavilion stand, allows him to watch an instant video play-back of everything that is unfolding out on the field of play. He will be able to watch how a bowler runs up, his line and length, where the ball pitches, the type of shot that is played by the batsman, and where the ball eventually finishes up be that as a result of runs, run outs, wickets, catches or just a dot ball.

Michael also monitors powerplays in limited-overs games and is able to provide comprehensive information during and after a day’s play to the captain and the coach to analyse. The information can also be passed on to each individual player so they can assess their strengths and weaknesses and seek advice on improving their game performances. “The in-depth analysis helps everybody to improve on what they are doing in an effort to reach the peak of their ability and the camera never lies”, said Michael.

Michael uses a computer and software provided by the ECB and his experience means he can evaluate in minute detail a complete picture and panorama of a match with aspects which the human eye might miss.

At ESPN Star Sports he provided new and advanced data insights during the India-England Test series, and has also analysed matches at the 2013 Women’s World Cup in India and the 2014 World Cup Qualifiers in New Zealand.