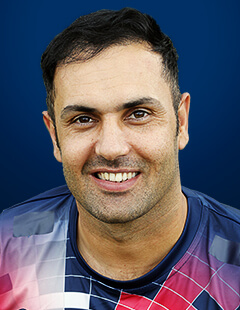 The Afghanistan International was recently named as the best T20I all-rounder in the world in the ICC’s latest Player Rankings, and gained cult hero status in his time at the county last year with several memorable performances in a Spitfires shirt.

His destructive innings of 43 runs from only 12 balls to help Kent defeat oldest rivals Surrey at the Kia Oval in July was one of the stand-out batting performances of the tournament.

Nabi finished second in Kent’s six-hitting charts, his 11 maximums only one behind the 12 scored by Zak Crawley and Alex Blake.

With the ball, the off-spinner took eight wickets at a handy economy rate of 7.22, and took three catches in the field, including a fantastic boundary edge catch against Somerset at The Spitfire Ground, St. Lawrence on debut.

Nabi has experience in playing for franchises in T20 leagues around the world, including Sunrisers Hyderabad in the Indian Premier League (IPL), and also winning Australia’s Big Bash League (BBL) with the Melbourne Renegades.