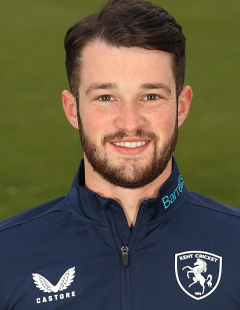 Academy graduate Ollie Robinson earned his first professional contract in September 2017 after deputising with the gloves on several occasions earlier in the year.

He was selected on the FGS Plant pre-season tour of the West Indies and took two catches in two substitute appearances.

He covered for Adam Rouse after he suffered a dislocated finger against Leicestershire in May before taking a superb juggling catch fielding at point in the final match of the season against Glamorgan in September.

Ollie had a breakthrough season in 2019, scoring his first first-class centuries for the Club including 143 against Warwickshire, and scoring 53 on T20 debut.

That year, he took the most catches out of any wicketkeeper in the County Championship.

In the 2019 close season, Ollie was called up to the England Lions for their red ball Winter tour of Australia. He made his Lions debut against A New South Wales XI, but didn’t bat, in a rain affected draw at North Dalton Park, in Wollongong.

He also made headlines with a superb run-out, reaching forward with both legs in the air and momentum taking him away from the stumps, against Gloucestershire in the 2021 Vitality Blast, a tournament that Kent went on to win.

Sidcup-born O.G. Robinson should not be confused with another academy graduate of the same name, who was born in Margate and went on to play for Yorkshire and Sussex.