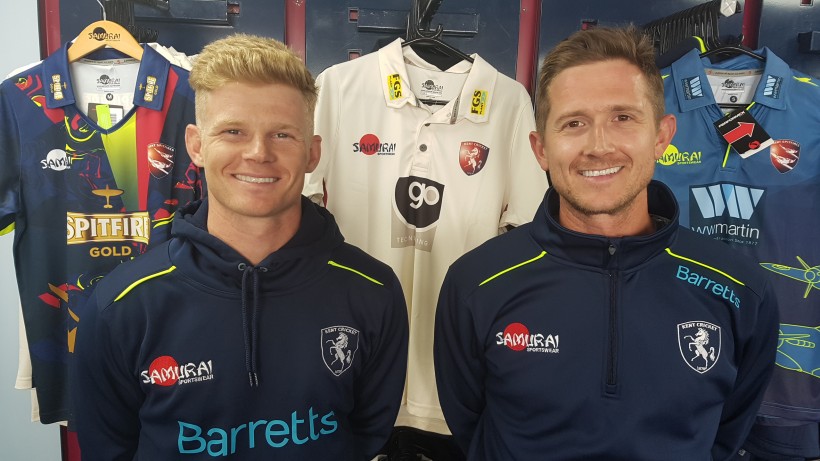 The Kent Cricket Academy graduates and England internationals committed their futures to the club they joined as schoolboys.

Billings said: “I’m delighted to commit my future to the club and I’m confident we’re building something very special at Kent.

“It’s been good to see the hard work and improvements on and off the pitch by the squad with the addition of new ideas and talent to what we already have here, I think Kent supporters can be hugely optimistic.”

The wicketkeeper-batsman passed James Tredwell’s club record as the most capped England T20 international when he made his 18th international appearance in the shortest format earlier this season and has the record for most catches by a Kent wicketkeeper in T20 cricket.

The Pembury-born batsman said: “I’m a Kent lad and passionate about the club so we’re keen to kick on and reach the next level to regularly compete for silverware. I think the progress we have made in a very short time is brilliant, and there’s plenty more to come.

“We have some fantastic people at this club and working with guys like Matt Walker and Paul Downton who have strong affiliations to the club, we know what cricket means to people in Kent.

“It’s great to see so many of our core players committing their futures to the club to provide continuity and build on the positive start we’ve made to the season.

“The buzz around the club is as good as ever. People are really enjoying their cricket.”

He enjoyed a prolific winter with bat and ball, showing all-round excellence after winning the Spitfire player of the year award for 2017.

The Canterbury-born batsman was the first Academy graduate to play for England and holds the club record scores in T20 (127 v Essex, 2017) and one-day cricket (150* v Glamorgan, 2018) as well as sharing the club record partnership in all cricket (382 v Northants with Sean Dickson at Beckenham in 2017).

Denly said: “I’m enjoying my cricket as much as I ever have and that’s showing on the pitch.

“We’re building a talented squad with strength in depth supported by a great backroom staff off the field.

“There’s still be plenty to play for this season so I hope we can carry on the push for promotion and challenge in the Vitality Blast.”