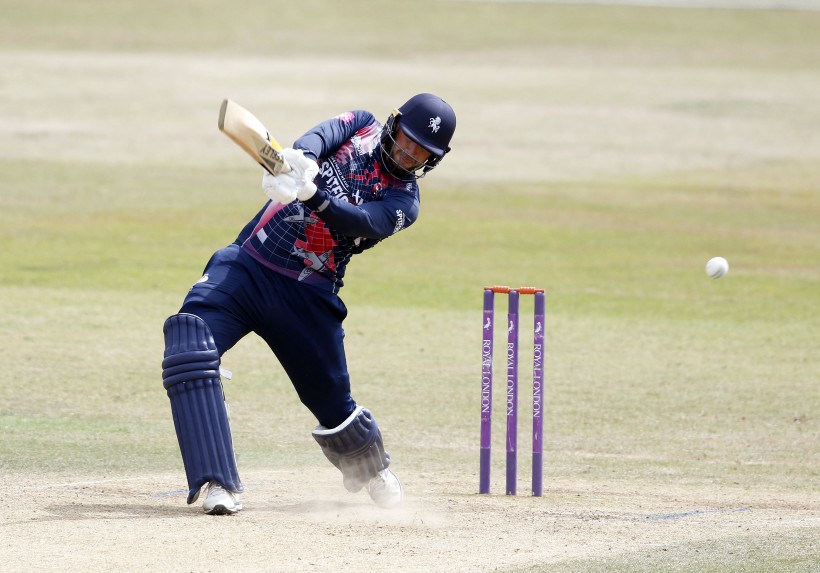 Alex Blake erupted in the final over as he dragged Kent Spitfires to an incredible two wicket Vitality Blast victory over Hampshire to replicate his 2015 heroics.

Big hitting Blake powered 57 off 38 balls to maintain the Spitfires’ 100 percent record in the competition, having come to the crease with his side in dire straits.

Four years ago, Blake left the Ageas Bowl open mouthed as he crashed 71 in 30 balls, having arrived at the crease at 70 for five chasing 178.

On this occasion, the 30-year-old walked out at 41 for four, still requiring 105, and took Kent over the line by striking back-to-back sixes from the final Chris Wood over to secure two points from a tight encounter with a ball to spare.

After Hampshire had scored a par 145 from their overs, Kent lost stand-in captain Daniel Bell-Drummond to the fifth ball of the reply when he chopped Chris Wood behind.

Ollie Robinson clubbed World Cup winner Liam Dawson over the midwicket boundary but only picked out Aneurin Donald when attempting an action replay.

The Spitfires were then stunned to 32 for three when overseas star Mohammad Nabi mistimed a pull off Kyle Abbott to Vince at mid-off.

Abbott, who only played three times in last season’s Blast, picked up a quick-fire second when Zak Crawley leading edged to mid-on.

The slide continued when Sean Dickson was stumped off Mason Crane, although Blake powered the leg-spinner to two straight sixes to keep the run-rate manageable.

And with 16 needed from the last over Hampshire were still favourites.

But two twos and a pair of ginormous straight sixes sent Blake running around in delight.

Earlier, Hampshire elected to bat first in front of the Ageas Bowl’s highest domestic crowd for two years, with around 10,000 packing the ground including thousands of youngsters on All Stars Day.

They weren’t treated to an electric start from Rilee Rossouw and Aneurin Donald as the former was dropped at midwicket.

Donald did smash Hampshire’s first maximum of the competition, over fine leg, but departed next ball when he skied straight up in the air, before Rossouw nicked off.

England World Cup squad member James Vince proved his hangover had abated a week after that thrilling final at Lord’s when he drove and then cut his first two deliveries the boundary.

The Hampshire skipper then dispatched two sixes off an Imran Qayyum over as he reached 29th T20 fifty in 33-balls.

But two balls later he handed Nabi a caught and bowled which the hosts failed to recover from.

Fred Klaassen, who dismissed James Fuller and Sam Northeast in consecutive balls, and Viljoen ended with figures of two for 27 and two for 20 respectively as Kent strangled Hampshire – with only 42 runs coming in the last six and a half overs.

Match-winner Blake said: “I obviously have good memories here like that game in 2015 and like playing here.

“David Griffiths who was a Kent and Hampshire player sent me a phone of after the 2015 game when we were in the changing room with champagne earlier and said ‘same again today’ which jogged my memory.

“I was struggling against the spin but we were saying out there that if we could set it up towards the end then you never know if you could sneak over the line.

“I still knew that when it was 12 off three that two sixes would win it. I tend to think in sixes.

“The first couple went for twos and then I missed one. I got the low full toss over and then the last one crept over Morris’ head in the wind.

“You are never out of the game and I have the confident that I can clear the ropes.

“We haven’t clicked yet with the bat in the opening two games so we still have a lot of improvement despite being two from two.”