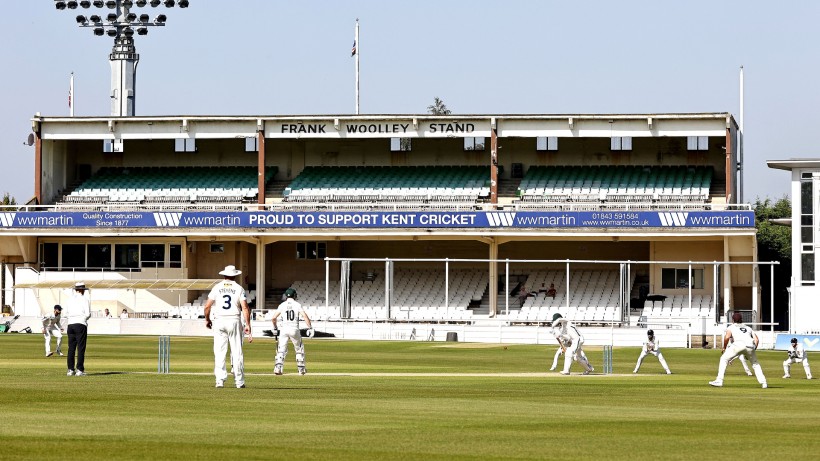 Kent’s final match of 2021 sees the visit of Middlesex to The Spitfire Ground, St Lawrence in the LV= Insurance County Championship.

Kent have won the LV= Insurance County Championship Division Three title after a morning of high drama at Canterbury, where they beat Middlesex by two wickets.

Kent finished on 375 for eight, but they were in trouble early on after Toby Roland-Jones brilliantly ran out Tawanda Muyeye for 89.

They also lost Darren Stevens for 14, before Marcus O’Riordan and Grant Stewart revived them with a stand of 48 and Matt Milnes hit the winning runs.

Kent began day four on 275 for five, needing another 98 to win and as the batters walked out a member in the Knott-Underwood stand yelled: “You were seeing it like a football yesterday TS, good luck,” at Muyeye.

Middlesex had dragged themselves back into a game that had been drifting away from them when Murtagh had dismissed centurion Ollie Robinson with the final ball on day three, but Kent made steady progress at the start and added 20 runs before Muyeye chased a single and was halfway down the wicket. He was sent back by Stevens and run out by a direct hit from Toby Roland-Jones, who had barely a stump to aim at.

A visibly distraught Muyeye trudged back to the pavilion and Stevens was then caught by a diving Sam Robson at second slip, after edging Roland-Jones.

At that point Kent were 310 for seven but O’Riordan and Stewart took them to within 16 of victory when the former edged Martin Andersson for 26 and was caught at second slip by Robson.

As the tension mounted Kent scrambled a single and a shy at the stumps went for four overthrows. Stewart survived a loud appeal for caught behind off Andersson and hit the next ball for four to reduce the target to two.

Kent secured the title when Milnes steered Roland-Jones to third man, giving them 19 points and Middlesex three, leaving the visitors as runners-up.

The LV= Insurance County Championship Division Three title race is set for a nerve-shredding finale, after Kent reached 275 for five against Middlesex.

The hosts, currently second in the table, need another 98 to overhaul leaders Middlesex, following a pulsating third day at Canterbury.

Ollie Robinson hit 112, but he was out to the final ball of the day, caught by John Simpson off Tim Murtagh, who took two for 23.

Tawanda Muyeye is unbeaten on highest first-class score of 76 not out, after a stand of 172 with Robinson, as Kent recovered from 103 for four to give themselves a fighting chance going into day four.

Earlier Matt Milnes took five for 87 as Middlesex were dismissed for 363, setting Kent a target of 373 to win.

The visitors resumed on 298 for six and Luke Hollman was out for 29 in the second over of the morning when he chipped Marcus O’Riordan to Nathan Gilchrist at mid-on.

Toby Roland-Jones was caught by Jack Leaning at third slip for six, after edging Milnes’ second delivery with the new ball.

Milnes then flattened two of Simpson’s stumps to bowl him for 46, cueing an aggressive cameo from Ethan Bamber, who hit 25 from 23 balls before Milnes bowled him middle-stump, leaving Murtagh unbeaten on five.

Kent’s chase suffered an early blow when Murtagh had Jordan Cox caught for one at third slip by Robbie White and Daniel Bell-Drummond fell early in the afternoon session, edging Bamber to Stevie Eskinazi at first slip.

Martin Andersson had Jack Leaning LBW for seven and Kent’s chances of chasing down the total took a major hit when Zak Crawley was leg before to Roland-Jones for 47.

However, Muyeye brought up his maiden first-class 50 when he drove Roland-Jones through cover for four and Robinson was on 75 when he survived a loud appeal when Middlesex were convinced he’d chipped Hollman to Sam Robson at point. Robinson stood his ground and after conferring, the umpires ruled he was not out.

Robinson subsequently pushed through Bamber point and scrambled a single to bring up his century, but Middlesex’s decision to take the new ball for the final over of the day was vindicated when Murtagh found his edge and he was caught in the slips.

Kent’s Ollie Robinson said: “It’s disappointing to have got out to the last ball of the game, I’d have liked to have been there tomorrow. Tawanda and I were trying to knuckle down there and get us into a position where we could win tomorrow.

“I think we’re potentially favourites, but the first hour is going to be crucial with the new ball. Hopefully Tawanda, Marcus and Stevo can see us home.”

A century from Mark Stoneman put Middlesex slightly ahead at the end of Day Two of their LV= Insurance County Championship game with Kent at Canterbury.

Stoneman hit 109 from 148 balls, with 16 fours, as the visitors reached 298 for six at stumps. Daniel Bell-Drummond took his first wickets of the season, claiming three for 37, but Kent already trail by 307, having earlier been dismissed for 138 in their first-innings, a deficit of nine.

Tawanda Muyeye was the top scorer with an elegant 30, while Ethan Bamber took three for 36 and Martin Andersson three for 44.

Kent began day two on 82 for four, trailing by 65 and Ollie Robinson added just three to his overnight score when Bamber splayed his stumps, bowling him for 14. Night-watchman Matt Milnes then made 16 before pulling Andersson to Luke Hollman, who took a tumbling catch at square leg.

Darren Stevens hit a single boundary before he was bowled by Bamber for four and Toby Roland-Jones sent Marcus O’Riordan’s leg stump flying for a 15-ball duck. Grant Stewart was LBW to the next delivery, but Roland-Jones was made to wait to for the hat-trick ball because Muyeye was out in the next over, caught behind off Andersson trying to flick the ball down the leg side.

Middlesex reached 32 without loss at lunch, and although they lost Sam Robson for 19 when he edged Stevens to Robinson, Stoneman and Stevie Eskinazi put on 68 for the next wicket before the latter was LBW to Daniel Bell-Drummond for 31.

Stoneman and Robbie White reached 185 for two at tea, but Kent struck early in the evening session when Milnes got White for 38, the ball looping off his bat to Jordan Cox at first slip.

Stoneman eased his way to three figures with a glanced four to third man, but Middlesex suffered a middle order wobble when Max Holden left a ball from Milnes that bowled him for eight and Stoneman fell when he played on to Bell-Drummond.

Bell-Drummond then had Andersson caught behind for 15 but John Simpson (21 not out) and Hollman took the lead past 300, the latter smashing O’Riordan for six over cow corner on his way to 29 not out.

Kent’s Jack Leaning said: “It didn’t quite go as we would have hoped this morning. We obviously lost a few wickets quickly and they bowled nicely and then batted nicely. We didn’t quite hit our straps with the ball. We’re a little bit frustrated as a group but sometimes that can happen and credit to Stoneman. Hopefully we can make use of those conditions in the morning and there’s no reason why we can’t go out and chase.”

(On getting his county cap) “It was a surprise, I didn’t know at all to be honest. It’s obviously a very proud moment, I’ve really enjoyed my time down here at Kent so far and hopefully there’s plenty more of that to come. It felt the right decision (to move from Yorkshire) at the time. I felt that once I got into the environment and got to know the people and the way they worked I had a feeling that I was going to fit in straight away.”

Kent are 82 for four after Day One of their LV= Insurance County Championship game at Canterbury, trailing Middlesex by 65.

Darren Stevens took four for 21 for the hosts, including a spell of three for three from five overs, while Matt Milnes claimed two for 31 and Nathan Gilchrist two for 34. Mark Stoneman was Middlesex’s top scorer with 59, but the visitors collapsed from 121-2 to 147 all out.

Tim Murtagh then took two for 19 as Kent navigated a perilous final session, Ollie Robinson and Milnes the not out batters at stumps on 11 and nought respectively.

Second hosted first in the final red-ball fixture of the season, with the winners guaranteed to finish top of Division Three.

Kent won the toss, chose to bowl and entered the field to a standing ovation, following Saturday’s triumph in the Vitality Blast at Edgbaston.

Sam Robson made 13 before he was caught behind off Nathan Gilchrist and Stevie Eskinazi was LBW to Stevens for 15, but Middlesex made it to Lunch without further loss, ending the session on 84-2.

Stoneman brought up his fifty with a straight drive to Milnes that went for three, but Middlesex then lost five wickets for ten runs. Stoneman chopped a Stevens delivery onto his stumps and Stevens then trapped Max Holden LBW for a six-ball duck, before Grant Stewart sent Martin Andersson’s middle stump flying for nought.

Stevens’ fifth over of the session saw him get John Simpson caught behind for six and Luke Hollman went for golden duck when he was LBW to Marcus O’Riordan.

Toby Roland-Jones made nine when he chipped Milnes to a tumbling Stevens at mid-on and Ethan Bamber lasted just three balls before edging Gilchrist to Jack Leaning at third slip, without scoring. Murtagh then went for the fifth duck of the innings when Milnes yorked his leg stump to end the afternoon session.

Kent’s reply got off to a rocky start when Jordan Cox left a ball from Murtagh that clipped his off stump, bowling him for two. Zak Crawley, captaining the side in the absence of Sam Billings, was caught behind off Bamber 20 and Daniel Bell Drummond was LBW for 20 to Murtagh. Leaning was then bowled by Anderson for 27, leaving Milnes to survive the two overs as night-watchman.

Kent’s Darren Stevens said: “It’s evenly poised at the minute. I think when they were 120-odd for two, to bowl them out for what we did is a bonus. When they had Stoneman in there it was a little bit of a worry because we know he’s a class player and getting to fifty he’d have expected to get on, because the pitch wasn’t doing too much.

“We’ve got to knuckle down tomorrow and get stuck in. It’s a shame the top order are out, if we could have had one of them in with Robbo we would probably have been just ahead of the game. ‘Milnesy’ can bat as night-watchman, he was biting at the bit upstairs and wanted it. If we can get some sort of lead on there it’ll be good.

On winning the Vitality Blast and the feelgood factor around the ground: “We were talking in the middle, saying that for the first day of a ‘Champo’ game, on a Tuesday in September, we just want to say massive thanks to the fans for coming out and supporting us.

“It hasn’t really sunk in yet, it was such a great day, not only for the lads, but also for the Kent supporters and the Kent family.

“I want more trophies! If we can win this game and finish top of the third division we’ve had a phenomenal year really.”