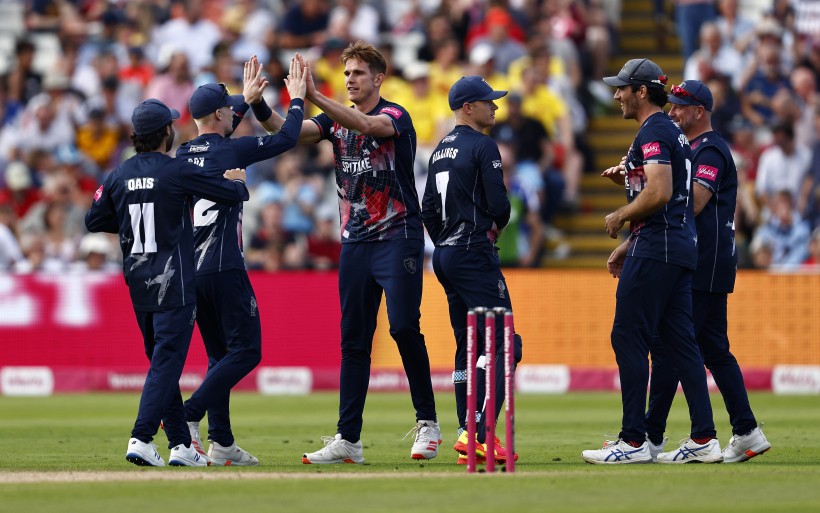 Bell-Drummond struck his sixth half-century of the competition – two more than anyone else – and was accompanied by an unbeaten 47 from 45-year-old Darren Stevens which helped the Spitfires to set a challenging target of 169 for the Sharks.

A fantastic bowling performance, led by Fred Klaassen’s four-for, ensured that it would be Kent and not Sussex who would go on to face Somerset in the final.

Having chosen to bat, Kent lost Zak Crawley and Joe Denly to George Garton in the Powerplay, but quickly got out the blocks – including taking Tymal Mills for 18 off one over.

Bell-Drummond held the innings together with a superb knock which included seven fours and two sixes – one dispatching Mills over his head and the other smearing over midwicket – and brought up his half century in just 29 balls.

Across the 11th and 12th overs, Kent lost three wickets for one run in the space of five balls to slip from 93 for two to 94 for five.

First, skipper Sam Billings also lost his leg stump to Ravi Bopara before Jack Leaning was clean bowled for a duck by Mills before Jordan Cox poked behind next ball.

Stevens left the hat-trick ball before accelerating the Spitfires with seven boundaries – although Bell-Drummond heaved to cow corner, Grant Stewart edged behind and Qais Ahmad was run out. Mills the pick of the bowlers with three for 33.

Phil Salt edged behind off Fred Klaassen before Luke Wright dragged one on off the bowling of Matt Milnes. A stunning grab by Jack Leaning sprinting in from deep cover meant the end for Delray Rawlins and left Sussex with just 40 for three at the end of the Powerplay.

The Darren Stevens show continued as he got David Wiese to drag on with his first ball and just as Ravi Bopara was starting to look settled, he was bamboozled by a beauty of a delivery from Qais Ahmad to leave the Sharks reeling at 57 for five.

George Garton threatened to winch open the game again with an explosive 23-ball 41 before he was caught at third man.

But Harrison Ward was caught, Tymal Mills castled by Matt Milnes, while Klaassen returned four for 17 when he rounded off the rout with the wickets of Chris Jordan and Archie Lenham.