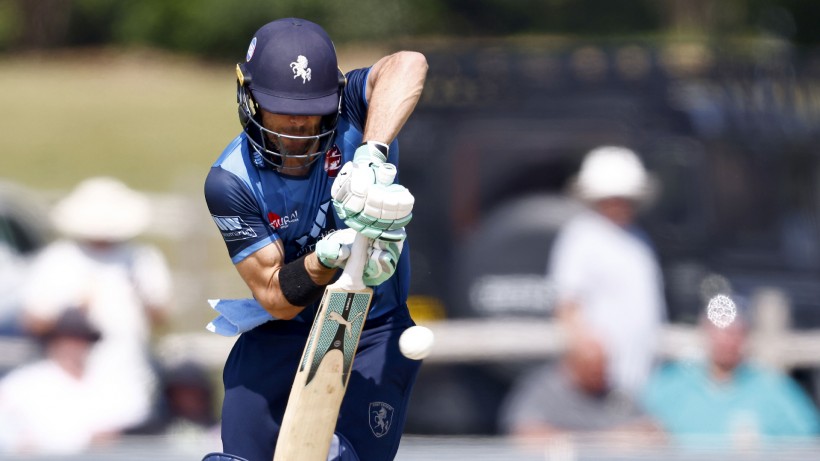 George Munsey’s maiden List A century had enabled Kent to set a demanding 324 target and he and Harry Finch’s partnership of 184 was a Kent List A record for any wicket against Worcestershire.

But Rapids opener Jack Haynes laid the foundations with a fine 77 and he received good support from Tom Fell before Leach’s late assault alongside excellent support from Barnard.

Leach and Barnard came together at 184-6 in the 34th over and their stand of 134 in 15.2 overs was a new Worcestershire record for the seventh wicket in all List A cricket.

Leach put the Spitfires into bat on a hybrid pitch and the move initially paid off.

Spitfires’ captain Ollie Robinson (13) was caught at cover off Charlie Morris and Heino Khun (19) was run out by Jake Libby’s direct hit from mid on.

Tawanda Muyeye (22) played back to spinner Josh Baker and was bowled but Scotland international Munsey and Harry Finch seized command for Kent.

Harry Finch was initially the more aggressive and reached his half century from 63 balls – 12 less than Munsey.

Munsey, who had scored 96 against Durham in the opening Royal London Cup game, gradually upped the tempo and required only another 33 balls in moving fifty to three figures.

Adam Finch broke the stand when he trapped his namesake LBW for 84 from 79 deliveries with one six and 10 fours working to leg.

Darren Stevens hit a quickfire 23 and late order runs from Milnes and Marcus O’Riordan lifted the final total past 300.

When Worcestershire launched their reply, Haynes drove Stevens for two boundaries and Dell collected three fours in a Milnes over.

Dell, on 20, was caught at cover off Stevens but new batter Fell and Haynes prospered.

Fell reeled off a succession of impressive strokes and Haynes also looked in good touch although he had one left off on 23 to Henry Finch off Matt Quinn.

He completed a 51 ball fifty and Haynes followed him to his half century from the next delivery, the 61st he had faced.

The second wicket pair added 94 when Fell was caught behind off Grant Stewart for 57 with two sixes and six fours.

Jake Libby, on 17, fell to a smart catch at backward point off Matt Quinn and

Haynes top edged a catch to backward square leg off James Logan who played for Worcestershire Seconds earlier this season.

Gareth Roderick and debutant Jacques Banton fell cheaply but then came the heroics from Leach and Barnard who finished unbeaten on 39 from 46 balls.