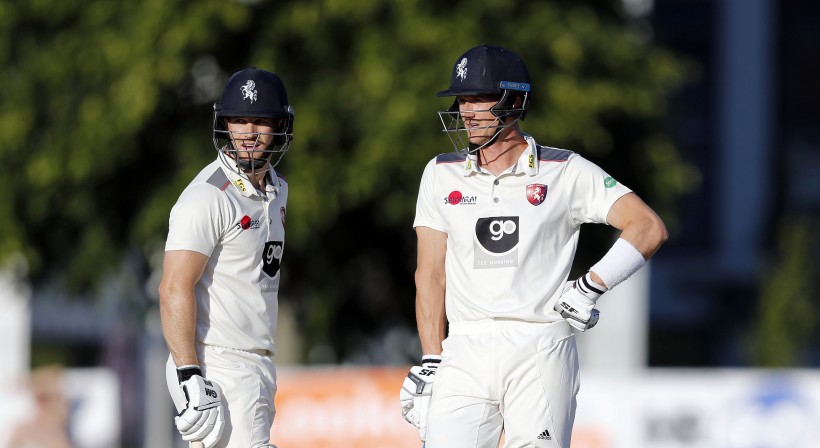 Joe Denly was given some Vitality Blast practise as he slapped 29 off 22 balls in a thrilling finale to Kent’s Specsavers County Championship clash with Hampshire – but couldn’t prevent a draw at the Ageas Bowl.

Denly provided the muscle in an incredible climax, which saw visitors Kent need a tantalising 153 from 17 overs.

But after Sean Dickson, Alex Blake and Daniel Bell-Drummond departed, Kent gave up the chase and shook hands after 50 balls – with the away side still requiring 96 runs.

Earlier, Aneurin Donald and Keith Barker had provided a wall to put Hampshire on course to save the match.

The seventh-wicket pair provided an important afternoon recovery for Hampshire after they had lost three wickets in 25 balls in the morning session.

Donald and Barker, who ended up on 43 and 37 not out respectively, battled through 30 overs to put the hosts on the brink of victory.

But Kent were given a late glimmer of hope, and some T20 practice, as they were given 17 overs to score 153.

But Sean Dickson slogged to long-off and Alex Blake, who replaced Heino Kuhn after he had been struck by a Edwards bouncer, both soon departed.

And when Bell-Drummond was bowled both sides decided to call it a draw.

The stalemate extends Kent’s unbeaten run in the Championship to four games, following victories over Nottinghamshire and Surrey and a draw with Warwickshire.

It also makes the county’s already high likelihood of avoiding relegation even stronger as they moved 69 points clear of basement side Nottinghamshire.

The draw means Hampshire remain a place above fifth placed Kent, although the visitors gain an extra bonus point to close the gap.

Ian Holland and Rilee Rossouw had looked stable to put Hampshire on course for a draw at the start of a crazy day.

They added 118 for the third wicket as both picked up their second half-centuries of the match.

Holland, who had scored 60 in the first innings, reached his fifty in 160 balls, while Rossouw, after his 90, needed 82 deliveries for a mature half-century.

But Denly and Rayner teamed up to end the partnership, rout through the Hampshire middle-order and completely change the complexity of the match in 25 balls.

Rossouw was the first to depart as he top edged a long-hop from Denly to pick out Daniel Bell-Drummond on the square-leg boundary.

In the next over Holland followed when he faintly edged Rayner behind to Ollie Robinson, the nick was so thin that Graham Lloyd needed almost four seconds to make his decision.

Gareth Berg followed quickly after when he was lbw to a Denly googly, the all-rounder bagging a pair in the match.

That spell had seen Hampshire lose three wickets for two runs as they reached lunch still trailing by 50 runs.

Lewis McManus falling soon after the interval, edging to Sean Dickson at first slip, push the game firmly towards Kent.

But a rear-guard from Donald and Barker made a positive result less likely with a 30 over collaboration.

Matt Milnes ended the 63-run stand when Donald pulled to Bell-Drummond on the boundary, before Kyle Abbott was lbw to Denly.

Mason Crane jabbed to short leg and Fidel Edwards was caught behind as Hampshire were bowled out for 298.

Kent batsman Joe Denly said: “We couldn’t take those wickets earlier enough in the day or throughout. It was a tricky track.

“Those wickets just after tea kept us interested. We were quite close to calling it a day if I’m being honest but Milnes and Grant came in for a few overs to cause some trouble.

“It was a little bit too late in the end. It wasn’t as if we had a power play; they had everyone on the boundary which made it hard work to score.

“We needed to get off to more of a flier and put their bowlers under pressure and we weren’t able to do that.

“It was exciting and I’m sure the crowd enjoyed it for an hour or so.

“The draw was a fair result in the end.

“It has been a long couple of weeks for us and the bowling unit and there was some tired legs out there but the efforts they showed to create chances was great but not quite good enough.

“It was turning quite a bit for me out the rough to the left handers. I managed to create a few chances. It was a long bowling spell which I’m not used to but nice to play a part.”

Beaumont and Marsh in Test squad

Stevens heads out on loan for Blast