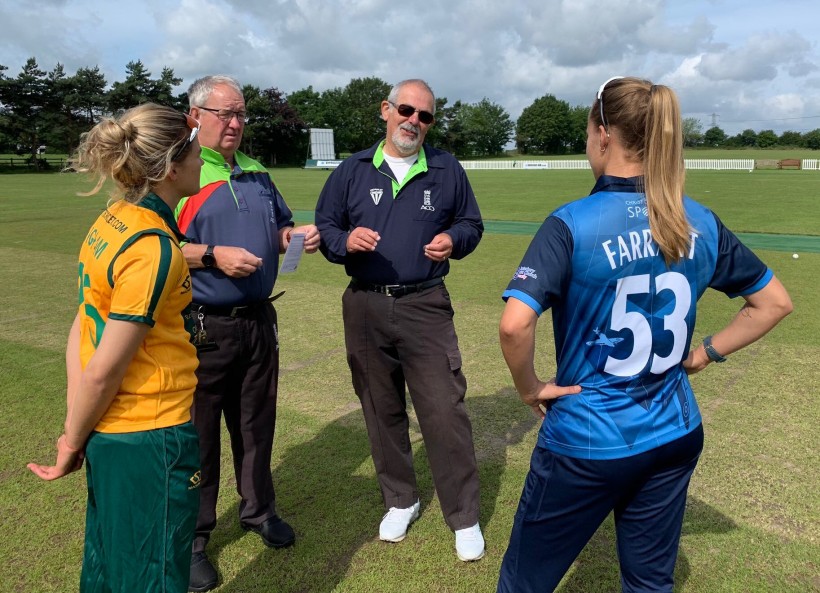 The opening weekend of the Vitality County Women’s T20 threw up two different finishes as Kent Women defeated Nottinghamshire before losing against Lancashire at Keyworth CC in Nottinghamshire on Sunday.

After losing the toss and being put in to bat against Notts, Kent lost opener Alice Davidson-Richards without scoring before Phoebe Franklin also departed for four, leaving ‘The Horses’ on 9/2, before Maxine Blythin and Grace Scrivens put on a partnership of 27 to steady the Kent ship.

Runs were hard to come by as Blythin top-scored with 22 for Kent, most other Kent batters finishing on single figures. Ryan MacDonald-Gay, on T20 debut, scored 10 from 15 balls.

The visitors ended their 20 overs with a score of 87/8, needing a good performance with the ball to defend their score.

After a good start for Nottinghamshire with the bat, Kalea Moore struck, bowling Yvonne Graves for 7  before Megan Belt dismissed opener Sonia Odedra (12, ct Blythin) and bowled Theresa Graves (4) to put Kent back on top in the second innings.

Rather extraordinarily, the next three wickets were all caught and bowled. Hannah Jelfs took the wicket of Polly Inglis (5), Megan Belt dismissed Megan Burton (1), and Kalea Moore sent Notts skipper Lucy Higham (18) back to the Pavilion to leave Notts on 62-6 heading towards a tight finish.

Kent captain Tash Farrant then struck to dismiss Hannah Huge for one from five balls, Phoebe Franklin ran out Sophie Munro for 2 from 3, and Alice Davidson-Richards bowled Rebecca Widdowson for two from four to keep the pressure on going into the final over.

Notts could only score a total of 84 steered by their last wicket partnership and Kent came out victorious by three runs. Megan Belt finished with figures of 3/12 to continue her good form from Kent’s Royal London Women’s County Championship title-winning season.

In their second game of the day, Kent won the toss and put Lancashire in the field.

Maxine Blythin was moved up the order to open the batting and scored 24 runs from 37 balls as wickets fell around her. Franklin, MacDonald-Gay, Davidson-Richards and Scrivens all lost their wickets for one run apiece as Kent struggled to provide a stable batting partner for Blythin. The Horses were 14-4 when skipper Tash Farrant came to the crease.

When Blythin was finally dismissed, Kent were 58-5 after Blythin and Farrant put on a much-needed sixth-wicket partnership of 44.

Farrant then accelerated alongside Kalea Moore to put on another 15 runs before the skipper was dismissed, in what was Lancashire ‘keeper Eleanor Threlkeld’s third stumping of the match, for 37. Lauren Griffiths ended on 13 not out as Kent posted a first innings score of 96/8 from their 20 overs.

In reply, Lancashire opener Evelyn Jones scored 37 with four fours and a six to put the pressure on Kent right from the start. Farrant took the wicket of Jones’ opening partner Georgie Boyce (3, ct MacDonald-Gay) and Moore trapped Natalie Brown LBW for 3 to give Kent some momentum, however Emma Lamb rallied Lancashire, scoring 29 to steer Lancashire home to win by six wickets in 18.2 overs, despite Threlkeld being bowled by Davidson-Richards for seven.

The result leaves The Horses in fifth place in the Vitality Women’s County T20 standings in a league where four points are awarded for a win. Warwickshire and Hampshire have won both of their opening fixtures and head the table both on eight points, with three teams sitting in mid-table, including Kent, on four.