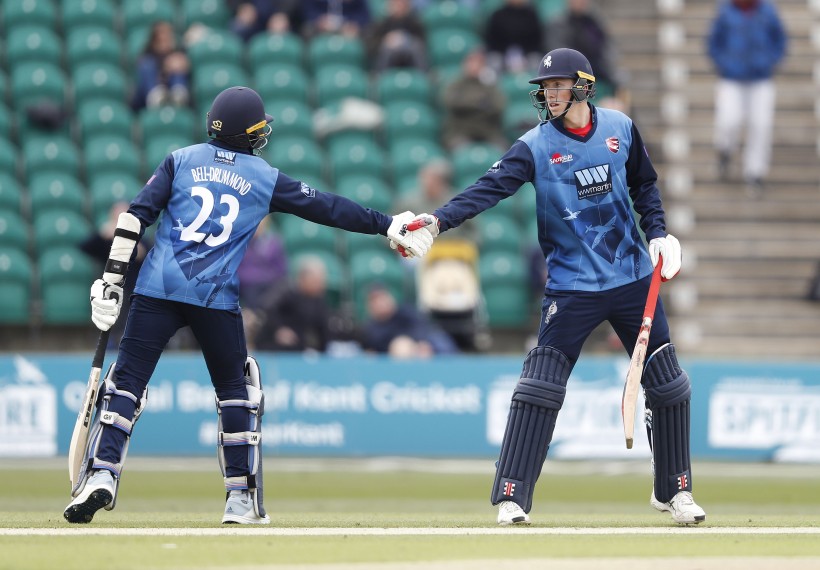 A record partnership of 188 between openers Daniel Bell-Drummond and Zak Crawley, beating Kent’s previous List A record partnership against Essex of 180 set by Mark Benson and Trevor Ward in 1988, saw the Kent Spitfires claim a six-wicket victory against the Essex Eagles in the ‘Battle of the Bridge’ at Beckenham.

Man-of-the-match Bell-Drummond followed a canny bowling spell of two for 36 with his sixth List A hundred from 107 balls and with 12 fours as Kent romped to their second successive south group success.

Having seen Essex make a watchful start to their innings total of 271 for nine, Kent’s openers Bell-Drummond and Zak Crawley set off with intent to post 61 during the batting powerplay.

The main aggressor, Bell-Drummond, reached 50 from 39 balls and with 10 fours as the Spitfire pair reached their century stand in the 16th over.

Essex turned to spin at both ends but the Kent openers ploughed on regardless as Crawley’s 50 came up off 57 balls with six fours.

After the opening stand of 188, Crawley fell six shy of his hundred, leg-before when working across one from Ravi Bopara, then Matt Renshaw (8) followed in similar fashion with the home score on 202.

Heino Kuhn (20) was bowled by Matt Coles, the former Kent all-rounder, who then had Adam Rouse (6) caught at extra cover, leaving Bell-Drummond and Alex Blake to polish the job off with 20 balls to spare.

Batting first on a bitterly cold day, Essex were forced to adjust their initial aspirations by a slightly two-paced pitch that assisted both spin and seam bowling early on.

Kent made their first breakthrough in the third over when Varun Chopra tossed away his own wicket. Walking outside off to aim a wristy flick through mid-wicket, he skied a catch off Harry Podmore to cover point.

Former England skipper Alastair Cook and Tom Westley regrouped with a watchful second-wicket stand worth 97. Westley sprinted to a 51-ball 50 – his fourth of the tournament, with six fours and a six – while Cook played within himself to contribute only 18 during his first hour at the crease.

Cook upped his tempo with a flurry of fours off Fred Klaassen and Renshaw leading to the introduction of Bell-Drummond at the City End, who struck with his third ball by trapping Westley leg before for 58 as the right-hander worked across a straight one.

The Eagles reached 125 for two by the mid-point as Cook marched to a 60-ball half-century with five fours. But three runs on Cook’s checked drive to a Podmore slower ball sailed to mid-off where Renshaw took an athletic, overhead catch on the run to spark a collapse of four wickets in 41 balls.

Dan Lawrence pulled a Matt Milnes bouncer low to Crawley at mid-wicket. Then, in the next over, Ravi Bopara’s top-edged sweep against Imran Qayyum was easily gathered at short fine-leg.

Qayyum removed Rishi Patel to finish with two for 37 when Renshaw held another steepler low down at long-on and Robbie White’s miscued pull sailed to backward square-leg to give Bell-Drummond his second scalp.

Simon Harmer was caught behind off a top-edged pull but Matt Coles scored a useful 34 before holing out to cow corer to give Milnes somewhat flattering figures of three for 60 as Essex successfully batted out their overs.

The Kent Spitfires welcome Middlesex to The Spitfire Ground, St. Lawrence in Canterbury on Tuesday 7th May for another floodlit Royal London One-Day Cup battle