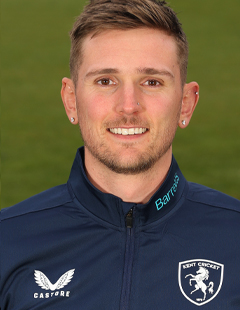 Harry joined Kent from Middlesex, where he found first team opportunities limited, in 2018. He was a key component of Kent’s promotion winning side that season. Harry played 15-matches in Division Two that season, picking up 53-wickets at an average of 23.04.

His best figures of 6-36 came against Middlesex in the fourth innings of a crushing 342-run victory. Josh Simpson was Harry’s fifth wicket, caught behind by Adam Rouse.

Harry also showed his potential with the bat, scoring 53 against Gloucestershire, and 33* against Glamorgan. In total he scored 235 runs at and average of 19. Harry also plundered 111 off 111 for the Kent Second XI against the Middlesex Second XI in a four-day friendly.

Harry was capped after the 2019 season, in which he took another 54-wickets in First Class cricket, including two five-wicket hauls against Warwickshire and Surrey as Kent finished fourth in Division 1 of the County Championship. More runs followed as well, with scores of 49* against Nottinghamshire, and 54* against Essex.

Harry as mainly featured in red ball cricket for Kent, but he has also played in 12 List-A games since he signed. He has taken 14-wickets so far, with best figures of 4-57 coming against Nottinghamshire in 2018. In this match against Notts, Harry dismissed all of the their top three batsmen (Chris Nash, Riki Wessels, and Tom Moores), reducing them to 23-4, opening the bowling alongside Kiwi Matt Henry.

In September 2020, Harry signed a new contract keeping him at The Spitfire Ground, St Lawrence until at least the end of the 2023 season.