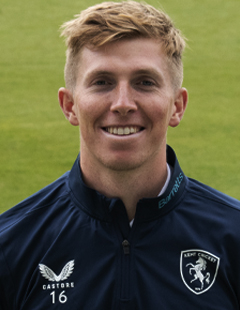 Zak made his Kent debut in 2017, scoring 62 against the touring West Indies side.

His first Championship followed in 2018, as he amassed 168 against Glamorgan towards the end of Kent’s successful Division 2 promotion campaign.

Zak added three more centuries in 2019, which could be considered to be his breakthrough year. 120-runs were scored against Middlesex in the Royal London One Day Cup for his maiden List-A hundred, and his 89 against Essex in the Vitality Blast was one of 10 fifties he scored over the season.

Zak’s good form was rewarded with a call up to the England Test squad for the tour of New Zealand, and he debuted at Seddon Park, Hamilton, scoring 1 batting at six.

More Tests have followed since, and his first 50 came in South Africa at the Wanderers, this time opening the batting, scoring 66 in a 107-run opening stand with Dom Sibley.

In the Coronavirus-affected 2020 Summer, Zak scored 76 against the West Indies and 53 against Pakistan, before a record breaking 267 for England against Pakistan. Zak’s impressive form in 2020 continued with a fourth innings, match winning 105 against Hampshire in the Bob Willis Trophy, and his first ever T20 hundred, also coming against Hampshire.

After his performances for Club and country in 2020, Crawley was named both PCA Young Player of the Year and one of Wisden’s Five Cricketers of the Year going into 2021.

In 2021, Crawley was a part of the Kent Spitfires side that won the Vitality Blast on 18 September, their second domestic T20 title and first trophy in 14 years.

The opener scored 380 runs in 12 appearances during the campaign, ending with an impressive strike rate of 150.79.

Zak is one of six Kent men’s batters to have scored 100 or more in each of England’s three domestic competitions for the Club.